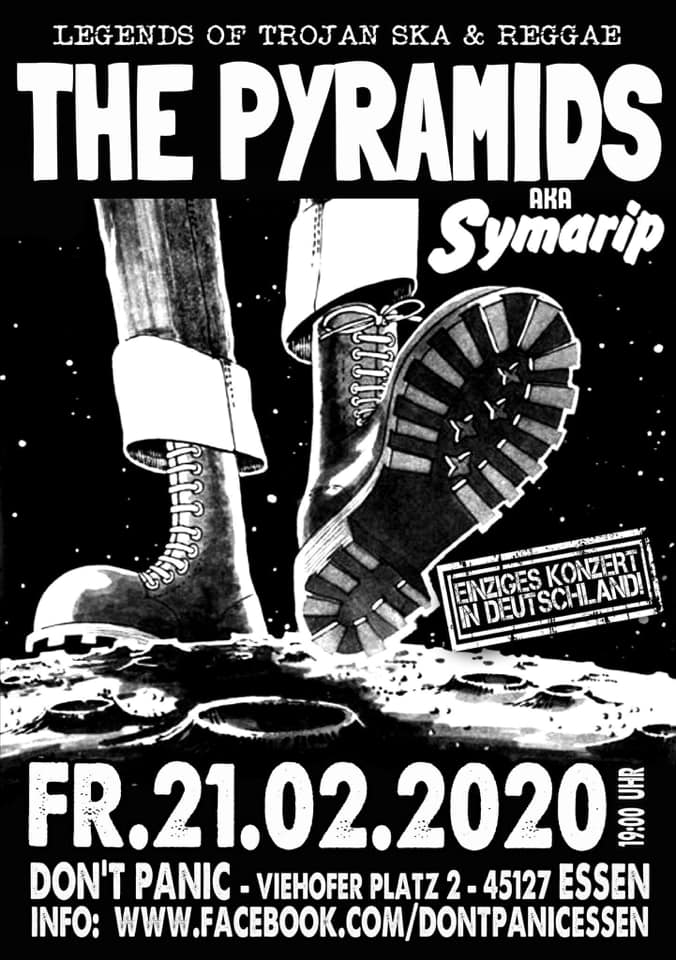 Symarip (also known at various stages of their career as The Bees, The Pyramids, Seven Letters and Zubaba) were a ska and reggae band from the United Kingdom, originating in the late 1960s, when Frank Pitter and Michael Thomas founded the band as The Bees. The band’s name was originally spelled Simaryp, which is an approximate reversal of the word pyramids.[1] Consisting of members of West Indian descent, Simaryp is widely marked as one of the first skinhead reggae bands, being one of the first to target skinheads as an audience. Their hits included “Skinhead Girl”, “Skinhead Jamboree” and “Skinhead Moonstomp“, the latter of which was based on the Derrick Morgansong, “Moon Hop“.

They moved to Germany in 1971, performing reggae and Afro-rock in Germany under the name Zubaba. In 1980, the single “Skinhead Moonstomp” was re-issued in the wake of the 2 Tone craze, hitting #54 on the UK Singles Chart.[2][3] The band officially split in 1985 after releasing the album Drunk & Disorderly as The Pyramids. The album was released by Ariola Records and was produced by Stevie B.

Pitter and Ellis eventually moved back to England, where Ellis continued performing as a solo artist, sometimes using the stage name Mr. Symarip. Mike Thomas, who had moved to Switzerland and met a Finnish girl there, moved to Finland where he worked as a musician, doing the groundwork for the Finnish reggae culture through his band Mike T. Saganor. Monty Neysmith moved to the United States, where he toured as a solo artist.

In 2004, Trojan Records released a best of album that included a new single by Neysmith and Ellis, “Back From the Moon”. In 2005, Neysmith and Ellis performed together at Club Ska in England, and a recording of the concert was released on Moon Ska Records as Symarip – Live at Club Ska. In April 2008, they headlined the Ska Splash Festival inLincolnshire as Symarip, and later performed at the Endorse-It and Fordham Festivals. Pitter and Thomas now perform in a different band as Symarip Pyramid. Their Back From The Moon Tour 2008-2009 was with The Pioneers. In 2009, to celebrate the rebirth of the band and the reunion of the two original members, Trojan Records released a compilation album, Ultimate Collection. Pitter holds all copyright and trademark rights for the name Symarip Pyramid.

Monty Montgomery was born In Port Antonio, Jamaica. This talented and charismatic singer started to write and create music in his early years. While studying in London, England, Monty met with fellow Jamaican musicians on the weekends.

This led to the creation of the worldwide known

All Change On The Bakerloo Line, Must Catch A Train to Night, etc.

This band reached the British Charts and toured all over Europe. Monty collaborated with the legendary “Godfather of SKA” Laurel Aitken and Eddie Grant.

Monty holds numerous awards and is listed in the Guiness Book Of British Hit Singles. Voted as one of Top Reggae Artists of all times by Billboard magazine. Monty’s versatile songwriting genius is his biggest asset. His many years of performing all over Europe, USA, Africa and the Caribbean, including the annual Sun -Splash in Jamaica, has given him the experience and skills that makes him the ultimate professional that he is today. Several of his songs have become staples on the list of many young SKA bands around the world. Sharon Woodward’s “Thank you, Skinhead Girl”, a documentary film made in the UK, includes Monty’s penned “Skinhead Girl”. Monty Montgomery’s albums: Seeds, Massive Are You Ready , Crucial Vibes and Back To Jump Street established him as a solo artist in the reggae world.

Miss Goosy (Audio and Video) is an ideal party mix and the video is very funny. It is now available @ CDBaby.com

Monty also was a finalist in 2008 Jamaica’s Festival with the song “My Jamaica”.

Now his latest work “Yah Mon” ranges from SKA to Reggae, and will with no doubt stand out. Songs like “Yah Mon”, Sweet Suzie”, “It’s time again” and “Kingston City”, just to name a few.

Monty’s latest single “The Freak In Me” was produced and arranged by Grub Cooper, from the number one band in Jamaica, known as FAB 5.

Monty and Jump up Records teamed up to release four new titles on vinyl. “Spirit Of 69 ” is a must to listen and dance to.

Monty’s live shows are engaging and energetic, and he always leaves his audiences feeling positive and happily skanking, begging for more.

Tickets for 2016 are available HERE

TEAR UP from Watford, A brand new young oi! act

Dekkertones a leading British Ska Tribute act, to get the party started

SPECIAL GUESTS WILL BE ANNOUNCED AT THE EVENT

Bands and DJ’s wishing to perform, all info and enquiries, contact Symond at subcultz@gmail.com

The Great Skinhead Reunion Brighton Every Year, the first weekend of June, Skinheads come from across the globe to Brighton seafront. for full event details go to www.subcultz.com

FULL 3 DAYS EVENT, YOUR WRISTBAND IS VALID THROUGH OUT, YOU CAN USE IT FOR AS LITTLE, OR AS MUCH AS YOU WANT. THE EVENT WILL SELL OUT, AND THERE WILL BE NO ADVANCE DAY TICKETS AT A REDUCED DAILY RATE , IN ADVANCE.

The line-up maybe subject to change, as so many band members and dj’s are involved. Babies coming along, alcohol, world wars and famine can be unforeseen, but the Great Skinhead Reunion, is more about coming to Brighton to see all your friends and making some more, for 3 full days of mayhem.

Brighton is situated on the south coast of England, approximately one hour from London. London Gatwick is the nearest airport. There are regular direct trains and National Express buses. The next nearest is Heathrow,  There are also direct trains from Luton Airport . Its advised not to fly to Stansted, as this is a long way, and you risk losing valuable drinking time