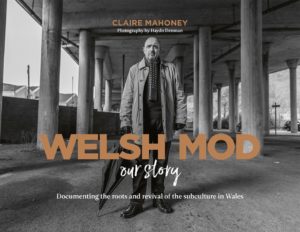 This is a first book from Claire Mahoney and a first about the roots and the revival of the mod subculture in Wales with stunning photography and stories from the people who were influenced by it. Welsh musicians, fashion designers, film directors, DJs, record collectors and scooter enthusiasts as well as some well-known ‘Faces’ give their first hand accounts about what mod means to them and how it has changed their lives. It covers the 60’s through to the present day.Although it is about the mod scene in Wales its very much relatable to many other parts of the UK and the rest of the world. Mods Of Your Generation is honoured to feature such a talented Journalist, Director & editor in an interview and wish her all the best in her future endeavours.Buy it here www.welshmod.co.uk 1) The book has been released approximately 6 months now, it has had a lot of great reviews and gained a lot of interest. How has people’s reaction to the book felt and is it as you expected. The reaction to the book has been brilliant really. Quite overwhelming at times. Even 6 months after the initial publication it is still ongoing. I think in part because we have kept it going with the social media side of things. That has been really important in keeping people involved with the whole story of the book. 2) You are a huge fan of Paul Weller and recently he endorsed the book. The Jam was very influential in your teenage years. How did it feel to have Paul Weller’s encouraging and positive comments about the book and to even receive a picture of him holding it? To me getting a pic off Paul and knowing he likes the book is the ultimate accolade. I was and still am a massive Jam fan and have followed Paul’s career since I was 13 years of age. I still have to pinch myself when I look at that pic. Seeing him holding a piece of my work is really something else.

3) When was the first time you saw The Jam perform and what was it like? The first gig I ever went to and the best gig I ever went to. Jam gigs, as any fan will tell you, were something else. You spent most of the gig off your feet as the crowd would move as one mass of sweating singing people. The energy was incredible and I’m so glad I experienced that even though I was only 14 – it marked the start of a long journey that has resulted in this book. The title page quotes The Jam Lyrics “True its a dream, mixed with nostalgia” and that pretty much sums up how I feel about it all really. 4) What inspired you to write the book and why did you feel it was important to tell the story in the view of a welsh mod? Being Welsh inspired me first up, but also being part of the scene here and seeing the passion and love of mod in all its incarnations and re-incarnations in the people I met. I think there is a Welsh take on mod that is more down to earth and grass roots because of the surroundings here. It was always a struggle for people in Wales to be recognised for anything. Try being a mod in a valleys town – it ain’t Soho I can tell you! Plus no-one outside of Wales tended to take you seriously – you would be judged on where you were from first. We tend to try that little bit harder down here as a result and I think it shows. Plus we know how to have a good time!

5) You grew up in Cardiff in the 80’s where music & fashion was continuing to evolve and seemed to be an exciting time to be a teenager with a wide array of styles and subcultures. As a lot of new fashion and music came to the forefront of teenage life. What was it that stuck out about ‘MOD’ that resonated with you? It was the music and the attitude of the music and its message that chimed with me. It was all about being part of something, being different, going one better. The mainstream music of the time was awful and the fashion did nothing for me. Thank god I found bands like The Jam and Secret Affair as without them I might never have discovered so many fantastic other artists such as The Small Faces, The Action, Modern Jazz and soul music.

6) When people discover that I am a mod, I regularly get asked “What is a mod?” I try to do my best to explain what it is and what is about but feel I never give it justice. For me it’s exactly that a feeling. Everyone has their own story to tell and what inspired them to get into the scene. Can you describe what mod means to you? On a very basic level mod to me is about good taste I think – good taste in clothes, music, art, design. Its about being smart not just in the way you dress but the way you think. Having a bit of pride about things and always being open to new ideas.

7) The book documents the roots and revival of modernism in Wales however do you think other areas of the UK & the rest of the world can relate to the movement and the stories told within. Absolutely – in Scotland, Ireland, The Midlands – you could probably tell the same stories. Mod in the suburbs or the provinces is always going to be a little different from mod in the city. 8) The book features many interviews with very significant Welsh born people from the 1960s -1980’s including award winning welsh writer, Actor and film director Jonathan Owen amongst others. Who else is featured in the book? We have Jeff Banks the fashion designer, musician Andy Fairweather Low from Amen Corner, Wyndham Rees from 60’s mod band The Eyes of Blue, Bryn Gregory from 70’s/80’s mod band Beggar and film director Jonny Owen who got into mod at the tail end of the revival and on into the Brit pop years.

9) The book features stunning images and photography from BAFTA Cymru winning cameraman & photographer Haydn Denman. Where can people find more of his excellent work and are there any photos taken that didn’t appear in the book? We are currently creating an archive of the many pictures that didn’t appear in the book on the website. www.welshmod.co.uk. But Haydn has travelled all over the world photographing and filming. But he is very keen to work on projects that relate to Wales. You can see more of his work at www.haydndenman-photography.com 10) You used a crowd funding website called kickstarter to make the book a reality. What advice would you give aspiring authors using this way of funding their work? Going the Kickstarter route is tough and nail-biting. My advice – set your target as low as you can to cover your costs and plug the hell out of it on social media.

11) Claire you are a journalist, editor and broadcaster with over 25 years’ experience in media. You have written a lot of articles about the mod scene for Mod Culture and The New Untouchable websites. What other work have you done regarding the scene or anything else you have been involved in? I have featured on BBC Radio Wales several times talking about mod and 60s music. I contributed the forward to the first book on mod girls called Ready Steady Girls, I’ve been involved as an interviewer for The Jam Literary Event and will be featured in the 2nd Modernist Literary Event which takes place this September in London and is a must attend for anyone interested in mod culture. https://www.thecockpit.org.uk/show/the_2nd_london_modernist_literary_event 12) The Mod scene is constantly evolving as many young people discover the scene today. Is there a vast number of young people getting immersed into the scene living in Wales? I think there are more and more people here who are looking for something a bit different and who are looking back and discovering the music and style of the 60’s for sure.

13) You had a launch party to celebrate the release of the book. It had every generation enjoying everything mod together under one roof. Which is very much what Mods of Your Generation is about. Can you tell us about the atmosphere, the party and the people & bands who attended? It was brilliant. It certainly spanned all the generations and it was a great celebration of the music and style that has brought so many of us together. It felt like one big family really – still does. I’ve made some great friends through this project. The band that played was called River who came from Spain – the reason being their frontman – Steve Garland now lives in Spain having moved there many years ago. He was and still is a real ‘face’ in terms of the Welsh mod scene, so it was a real home-coming gig for him and loads of people turned out just to see him. 14) Are you a fan of any mod inspired bands making a name for themselves in the music industry today? The Spitfires are great and definitely have that energy about them, plus there is a Swansea band called The Riff that are making waves and again a mod look about them and their sound 15) Welsh born Fashion icon and designer Jeff Banks was keen to be involved in the book. How was it meeting with such an important fashion figure becoming British designer of the year in 1979 & 1981? I interviewed Jeff over the phone and he was gracious and enthusiastic and his memories of being a mod were pure gold for the book. I still have more of that interview which I’ll publish on the website. Jeff loved the book and his office ordered 10 copies! So I was really chuffed about that. Interview conducted by Johnny Bradleyinterview (c) Johnny Bradley & Mods Of Your Generation 2019