The annual skinhead reunion back to Brighton beach, where in 1964 the Mods and Rockers fought it out, giving birth to the next youth subculture known as the Skinhead. This is a four night and day event from noon til 2am each day. Thursday pre party then 3 nights of live bands, DJ’s From noon

Usually on the first weekend of every June, since 2011, Brighton has seen an ever increasing number of Skinheads and their lovely Skinhead Girls invade Brighton. Boots, Braces, pristine clothing and a cheeky smile. Attracting scene members from right across the globe, to Madeira Drive, overlooking the beach. A full three days of Skinhead related entertainment is laid on. DJ’s playing hyper rare vinyl, from the early days of Jamaican Ska, through to modern day Street Punk and Oi. Live bands hit the stage for 3 nights of the Volks bar . With various aftershows happening until the early hours, to keep the party buzzing.

The Great Skinhead Reunion is located on Madeira Drive Brighton, The Main venue used is the Volksbar.

Brighton has several nicknames. Poet Horace Smith called it “The Queen of Watering Places”, which is still widely used,and “Old Ocean’s Bauble”.Novelist William Makepeace Thackeray referred to “Doctor Brighton”, calling the town “one of the best of Physicians”. “London-by-the-Sea” is well-known, reflecting Brighton’s popularity with Londoners as a day-trip resort, a commuter dormitory and a desirable destination for those wanting to move out of the metropolis. “The Queen of Slaughtering Places”, a pun on Smith’s description, became popular when the Brighton trunk murders came to the public’s attention in the 1930s. In 1964 The infamous Mods and Rockers Beach battles would forever place Brigton in the History books for British Youth subcultures. Often referred to as the birth of the Skinhead culture, as those early Mods moved into the Bootboy, Peanut, Skinhead. The Who’s album and film Quadrophenia becoming probably the most iconic movie on subcultures ever made. Punk and Rave, young fashion designers and the mass of indepedant shops around the Laines area to buy a whole range of clothing and vinyl records.

Add to your experience, by getting a room in our Skinhead only hotels. Conveniently located, with a short walk to the venue, and no moaning neighbours to worry about.

The rooms vary in size and cost, to fit your needs. all within an easy walk to the skinhead reunion venue. We have hotels exclusive to the Great Skinhead Reunion guests and bands.

Party party !! please email subcultz@gmail.com with your requirements, to be booked into the Skinhead Hotels.

Brighton is situated on the south coast of England, approximately one hour from London. London Gatwick is the nearest airport. There are regular direct trains and National Express buses.

The next nearest is Heathrow,  There are also direct trains from Luton Airport . Its advised not to fly to Stansted, as this is a long way, and you risk losing valuable drinking time

One of the worst aspects of Brighton, is a lack of affordable parking. my advice is to use street parking on the suburbs of Brighton, its a reasonably safe place. a good bus service will take you into brighton centre (churchill square) and a short walk from there to the sea front. worth allowing the extra hours work, to save yourself serious parking charges 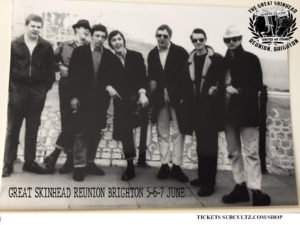 The second wave of Skinhead began to build in the mid 70´s with the birth of Punk Rock in 76, this time musically the Skinheads adopting the Punk rock sound and aggro of the football terraces.

Working class bands forming and putting out their own angry antisocial messages in music, frightening the media into a frenzy of misinformation, who promoted the image of hyper violent bootboys and girls on the loose. This was a time of major political unrest in the UK and extremist groups tried to recruit within working class culture, often targeting Skinheads and football supporters, in the hope of win one, win them all pack mentality.

Any questions or queries please do not hesitate to get in touch.