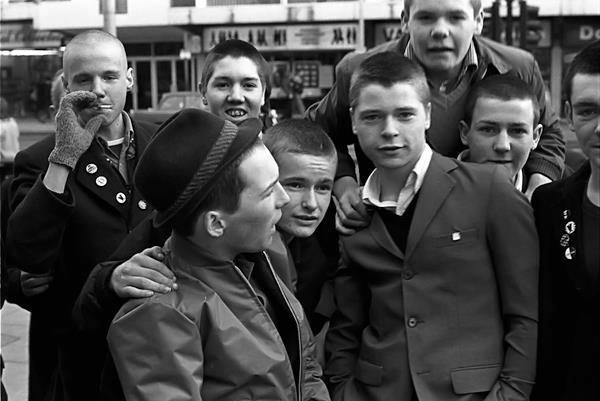 Skinhead culture emerged as a result of two shifts in British culture and
society in the early/mid 1960s. Firstly, the Mod scene which had been so popular amongst British youth had begun to split into different factions. While the middle class Mods were able to carry on pursuing the latest Carnaby Street clothes and fashionable haircuts, this was out of reach to most working classMods. In a scene so heavily based on consumerism, this undermined the workingclass Mods’ status and ability to take part in the scene. This led to the emergence of “hard Mods”, who marked themselves off from their peers with shaved hair,  jeans, braces  and work boots. This style, based on the typical style of British workingmen at the time, served to separate them from the old Mods and the middle class hippies of their generation. It served as “a conscious attempt by working class youth to dramatist and resolve their marginal
status in a class-based society.”

Within mod culture you can carve it down the middle. On one side you have ‘Peacock Mods’ who have the sharper, middle class, jazz influenced aesthetic and on the other side you have ‘hard mods’ who prefer soul music, are working class and enjoy Jamaican rudeboy culture.

That might sound like an odd combination but with the children of the windrush from the 1950s integrating into  British white working class society, all living and going to school together, it was inevitable that each culture would influence the other.

The 3 elements that the vast majority of 1960s skinheads indulged in were:-

The most (in)famous part of skinhead clothing is, of course, a pair of doc martens. They were what defined you from the mods or hippies with their delicate loafers or sandals. The doc martens were a sign of being working class and proud of it. Levi jeans or sta-prest trousers were popular having half-inch turn ups to show off their boots. Ben Sherman and fred perry button-down shirts offered clean, tidy looks with colourful checks to show off on the dancefloor on a night out. Crombie and sheepskin coats were the default coats.

They offered a little bit of style in comparison to the heavily polished boots. Skinheads also wore half-inch braces to display their working class credentials.

Like, with mod fashion, there was snobbery about where your clothes were from. The rarer the shirt, boots or jeans the more style conscious you were seen to be.  skinhead Girls (Sorts Renees) In the modern day, called ‘Skinbyrds’ wore clothing along the same lines. Short skirts, feather cut hair styles and loafers or brogues fishnet stockings, were the usual get-up.

Black music in the 1960s was still mainly American soul. so Reggae and ska was onlyheard if you had west Indians mates. The off beat rhythm, exotic sound and strange composition made it an attractive rebel music for skinheads to adopt.

Songs like max romeo’s ‘wet dream’ were risqué and appealed to the skinheads sense of danger. Reggae became so synonymous with skinhead culture that many reggae hits have been about skinheads. ‘skinhead a bash them’ was one of those released by Claudette and the corporation on the Trojan records label. Another favourite was ‘skinhead moonstomp’ by symarip, which for many encapsulates the skinhead reggae sound.

Other skinhead favourites were the upsetters, prince buster, desmond dekker, toots and the maytals, derrick morgan and john holt.

Reggae was the sound being created in the Studios of Orange Street in Jamaica, as the early Immigrants came to Britain they brought with them many things that were to change British society forever, for good and bad. The British music industry was at its height, feeding the forever demanding record buying youth. The Mersey sound of the Beetles, The swinging 60’s.

Labels were set up to market this brand new sound to the British working class and beyond. labels like Trojan, Island, Blue Beat and many more marketted the music to a demanding new audience. The sound of the Council estates and dance halls became alive with Calypso and Reggae.

When skinheads weren’t skanking in dancehalls to reggae or showing off their latest Ben Sherman shirt they were at the football ground looking for a fight. There is a strong connection of London football teams with skinhead culture. West ham are the most prolific in that link. Chelsea and other big London clubs had groups of skinheads roaming the stands looking for some ‘aggro’.

Usually their boots and short hair would be great assets in maximising damage upon another and minimising their own beating by having little hair to possibly grab onto. Some say that football hooliganism stems from those first skinheads joining their local teams firms and looking for violence. Of course, most of this wouldn’t have happened without copious amounts of booze.

After 1970, reggae hit the uk pop charts and skinhead culture spread around the country in different shapes and forms.

Some skinheads grew their hair a little longer and wore smarter clothing and abandoned wearing boots for loafers. These skinheads were dubbed suedeheads, smoothies, boot boys and soul boys. Skinheads had even reached Australia as british parents migrated to greener pastures down under.

These skinheads evolved through the 1970s as sharpies and enjoyed rock music with slade being one of their favourite bands.
With the spirit of ’69 in the past skinhead culture dwindled and it was another 10 years for it to be revived by a new wave of ska bands and awareness of race.

After 10 years of dormancy a handful of bands exploded into the charts with the ska beat that skinheads had fallen in love with so much. The first 6 singles from 2-tone records featured the specials, madness, the selector and the beat. If any of those records were played at a party now kids would immediately know them and sing along. The skinhead and mod movements had been given a new lease of life.

This 2nd wave of ska was to not only be about music and having a good time but also take on a political aspect.

Since 1969 skinhead culture had evolved in many ways:-

Skinhead clothing had merged with mod fashions to an extent in 1979. skinheads would wear fred perry polos, Lonsdale t-shirts, band t-shirts and brogues had replaced heavy boots. Just as mod influences had permeated so did punk clothing. Ma-1 flight jackets, bleached jeans and even shorter haircuts were common amongst some skinheads.

There were still traditional skinheads who wore the original styles and sometimes with a shaved parting in their hair. With the skinhead look becoming less regimented if you wanted to be a skinhead it was fairly easy to look like one.

But with 3 different looks to choose from it also meant there were different types of music you’d be interested in. If you wore flight jackets and bleeched jeans then you’d usually prefer oi!

If you wore  fred perry polos and loafers then you’d like 2-tone and the jam. If you wore the traditional styles then you’d enjoy the 60s reggae and ska of original  skinheads.

2-tone and oi! were poles apart even though they were both described as being skinhead music. 2-tone’s black and white check (even though unintentional) became a symbol of britain’s racial harmony, which was sung about in some of the labels releases.

Oi! on the other hand was angry, anti-establishment and predominantly listened to by white kids. Even though 2-tone took elements from punk it was a much tamer, watered down influence. There was crossover, as there is with many music genres, but only madness came close to combining the 2 successfully.

Oi! bands that emerged as skinhead favourites were the 4-skins, cockney rejects, the business and combat 84. these bands played a part in the eventual creation of hardcore punk, which skinheads adopted as another branch to the ever growing  skinhead family tree. However, A potent mix of race awareness and right-wing politics would soon change skinhead culture and make skinhead a byword for racist.

Throughout the 1980s skinheads became polarized over politics (an issue that was never an aspect of 60s skinhead culture). Skinheads were seen more and more often at right-wing marches and rallies, as mass immigration took a hold of the UK, the rise in unemployment and Britains fall from power, caused a nationalistic reaction amongst Britains working class society.

The media began to portray all. Skinheads as Fascist, Racist and Violent. This was the image that the media exported across the globe, which in turn picked up more negative press, and was actually used as e recruitment advert for white supremist groups mainly in the USA. Hollywood jumped on the band wagon making movies about the devils with cropped hair

At the same time other skinheads were reacting to this by starting up groups such as ‘skinheads against racial prejudice’ or ‘sharp’ for short. Skinheads also began left-wing groups who labelled right-wing skinheads as ‘boneheads’ because they thought they were unintelligent.

Oi music arrived in the early 80’s as a hard edged street punk. reacting against the middle class fashion of Kings Road Punk Rock. the bands making political statements about unemployment, police oppression, the plight of the working class. The violent firms across the Uk had found a musical voice, and violence was widespread. A riot happened in a predominantly asian area called Southall in West London, which hit he headlines.

Maggie Thatcher asked for a blanket ban on the Skinhead culture, which took all music from the record shop shelves, all radio play, media coverage. This caused many bands to fold up, even effecting the 2tone bands which main message was racial harmony. no venues could accept them. But the skinhead culture refused to die, it went underground. Collecting an even harder edge.

This period of skinhead culture was a time when some became disillusioned and uneasy with what being a skinhead meant. As a result skinhead culture seemed dead to many people, who weren’t interested in the extremes of violence or politics.

The tit for tat violence on the streets of London, the clamping down by the authorities and blacklisting was to almost destroy the skinhead culture forever.

If anyone would like to add to the Skinhead history section, please contact us at Subcultz. we Know there are many variations of the culture right across the globe.