Mods Of Your Generation Interview – The Electric Stars – “Beautiful Music For Beautiful People” MODS OF YOUR GENERATION·SUNDAY, 1 SEPTEMBER 2019What can say about The Electric Stars that hasn’t already been said?Formed in 2011 the band have featured in countless magazines and had many glowing reviews, with their album “Sonic Candy Soul” making the Top 12 of 2012 best albums in ‘Scootering Magazine’ alongside the likes of Paul Weller. Recently front man Jason Edge featured in the September 2019 issue of Scootering with an incredible two pager. They have the incredible ability of taking inspiration from all the best music from any era and blending it together to create original, new modern music. Their Psychedelic Rock n Roll sound and their upbeat soulful vocals sets them aside from others. They have one mission and that is to make “Beautiful Music For Beautiful People” and that is exactly what they do. Personally i would like to thank them for providing an alternative. I believe “music is the soundtrack to our lives” If you agree then you need the Electric stars in yours. To find out more about the band continue reading below

The band formed in 2011 how did it all happen? We formed while we were in the studio recording Sonic Candy Soul. The Album was already written & as myself, Keef & Andy went in to record we didn’t have a drummer. We used a guy who was hanging around with us & began laying down the tracks. The whole concept began to fall into place, the sound, the look, the vibe and the name, while we were recording. As soon as we finished it, that’s when we found our drummer, Johnny.

You signed to Detour Records in February 2012 and released a single in March. Then released your debut album ‘Sonic Candy Soul‘ in September. What was the reaction to the single and album? Once we had the Masters of the Album we started to look for the right label. Dizzy at Detour has always been great with us. He has great History on the Scene and is a Fab guy! The first single came out & got a brilliant response. In fact you can’t get a copy of that anymore! When the Album came out, I think we were happy with it, well most of us were ha ha, but you never know how the public will like it. But the response we have had since day 1 for the Album has been fantastic. Wherever we go around the UK now people have it, play it and talk about it. It’s a great feeling to know that people dig our songs.

THE ELECTRIC STARS Blind Album Sonic Candy Soul How did you come up with the name of the band – ‘The Electric Stars’? The name.. A lot of people ask about it! When we were in the studio everything was kind of in a melting pot. The image of the band is very important. We are very influenced by the late 60’s early 70’s sounds. So it is natural we dress that way. Lots of colour, vibrant imagery, psychedelic patters ya know. The name is suggestive. Like our music & vibe The Electric Stars suggests something! I’m not a fan of dull music & dull clothes. I like my Rock n Roll Stars to look Godlike! Local pub bands might dress in jeans & t shirt. The Electric Stars dress to kill.

The album was featured as one of the Top 12 albums of 2012 in ‘Scootering Magazine’ alongside Paul Weller. That must have been amazing, Tell me bout it? One of the 1st reviews we got for Sonic was in Scootering and it was Ace. We were a bit shocked but blown away with the write up! Then at the end of the year, they do a round up of the best Albums & Sonic Candy Soul is in there alongside Paul Weller… Totally Cosmic! In fact now you’ve reminded me about that, It’s brought back the way we felt & it was very humble. To get a review like that makes you appreciate every bit of support from everyone!

In 2014 the band recorded their own version of Belfast Boy, A song first released in 1970 by Don Fardon. Tell me about the reasoning behind releasing the track and how the idea developed? Belfast boy came about from a chance meeting I had with Eamon Holmes. He is a massive George Best fan like me. We got chatting about music and fashion. He is a big fan of The Electric Stars. He reminded me of the Don Fardon song and said that he didn’t think that anyone had ever recorded it since. We got in touch with the GB Foundation and the MUFC Foundation, both said they were behind the idea! Then we got a load of Players & Celebs to write about Georgie in the sleeve notes. It was a bit of an ambitious release but it got to Number 15 in the BBC Indie Charts.. Nice! The most pleasing thing for me is the B side. I wrote The Brightest Star about one of my Heroes and to have his sister say it is one of the best things ever recorded about George means more than the chart placing.

Belfast Boy – The Electric Stars | George Best Charity Single  ‘We Love You’ released in 2018 & ‘Sunshine’ released in 2017 are two of my favourite tracks. Which songs do you like performing live from your incredible repertoire? We Love You and Sunshine are both on the new Album – Velvet Elvis, The Only Lover Left Alive! To be honest I like all our tunes, we don’t let any bum songs get through quality control ha! Picking favourites is tough because they all mean so much to me. 136 is special.. It was written over in Florida & I really wanted to get the message across about this new band.. What we were.. Where we had come from.. What the message was going to be! Music for me is not just going through the motions. I can’t stand what is happening to music in 2019. Beautiful Music for Beautiful People is what we try to do. That lyric sums up The Electric Stars. We are trying to keep the flame burning and that’s important!

The Electric Stars – Sunshine ☀️ You headlined the ‘100 club’ which had an incredible response. Tell me about the night and what is was like performing at such an iconic musical venue? The 100 Club is a wonderful venue. Probably one of the most Iconic in the world! Most of my Heroes have played there and to go on last to a sold-out crowd was off the scale! All the bands on the night were Fab. Turner, Darron J Connett, The Sha La La’s all played out of their skin. It was a bit of an experience for sure. I hope we get to play there again as it’s a special stage to be on.On the back of the gig we got loads of press & our good friends at Scootering gave us a Fab double page spread. The support they have given us since day 1 has been Brilliant.

The Electric Stars – 100 Club – 2016The new single has been released ‘The only lover left alive’ where can we buy or download the album? The new album should have been out so long ago. Just down to laziness on the bands part I guess! The Only Lover Left Alive, Sunshine, We Love You & Loaded With Regrets are all on the new Album. Its gonna have a more stripped back feel to it.. More acoustic & less polished I think. More like the live Stars & less produced.

The Only Lover Left Alive – The Electric StarsDescribe the bands musical style and would you compare it to another? Mmmmm, well we are not ashamed of our influences. Retro, yes for sure, but with our own songwriting style! You can hear plenty of Who, Stones, Kinks, Faces for sure. But you can also hear Bowie, Bolan, Beatles & Floyd. I love American music, so Hendrix, Velvets, Doors & Love. Mix it all up with Blues & Grooves.. What do you get? Beautiful Music for Beautiful People!

Who are your musical influences as individuals or as a band from any era past or present? The Record Collection is huge man. But if you’re going to push me.. The Rolling Stones! I will gladly fight anyone in the car park who tries to tell me they are not the Greatest Rock n Roll Band in the world. There is a little bit of Stones in everyone & there is a little bit of everything in the Stones.

The Electric Stars are a Manchester based band, the city has an incredible history of producing many great artist and bands. Did this inspire you to get into music and to take up playing your instruments? Manchester is a wonderful city. We are great at most things. But, when it comes to Music, we are quite Spectacular! It’s a working class city that is big enough to challenge London and small enough to create its own culture and swagger. Being in a band in Manchester is something we just did! The Hollies, 10cc, Buzzcocks, Joy Division, Mondays, Roses, Oasis.. Not bad is it for a bunch of Mancs ha ha!

British actor & musician Gary Shail is a huge fan of the band and asked you to perform at the Quad 40 event on Brighton Pier. What was it like to be asked to perform at such an iconic event celebrating the 40th anniversary of a timeless cult film Quadrophenia? We met Gary a long time ago at a gig. He loves live music and used to be in a band before he was an Actor. He liked our sound and we became friends. Last year he called me up and said “Jay, I’ve got an idea & I want the Stars to be part of it”. What an idea it turned out to be! Quad 40 was absolutely Fantastic! To be asked to be part of the Anniversary of one of the most Iconic British Films ever made.. WOW It really was a Brilliant event. Still buzzing from it to be h honest.

Do you have anything you would like share with all your supporters? I think if I’m going to finish on something it’s just to say a huge thank you to everyone who has supported us. The people who come to the gigs & buy our music. The people who write about us & book us to play all over the UK and Europe. We write our own material and we never take it for granted that people prefer us to cabaret. We want to make a difference & in 2019 that is getting harder than ever! Thanks to you Johnny for giving us the opportunity to tell people about the band & see you all soon!

The Electric Stars – We Love You   Copyright © Johnny Bradley (Mods Of Your Generation) & The Electric Stars, 2019, All Rights Reserved. No part of this article may be reproduced without the permission of the authors.

MODS OF YOUR GENERATION·WEDNESDAY, 24 JULY 2019·   SAM QURESHI is an Alto Saxophonist and Composer of Jazz, Mod Bossa & Latin soul. He was born in Pakistan, grew up in Birmingham and has lived in Manchester since 1997. He is a 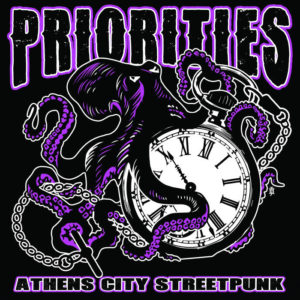 Priorities Has Something To Say!

The EP is free! The band has members of Close Combat among others. Lliam is a very talented song writer. Check this awesome track out.