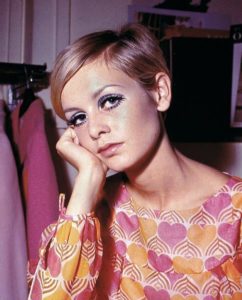 Back in the mod ’60s, when Twiggy conquered London and fashion changed forever, the waif of a teen with huge eyes, a boyish bob and long legs craved the glamour and curves of a different icon.

“Whether you’re thin, fat, small, dark, blond, redhead, you wanna be something else,” said the world’s first boldface supermodel. “I wanted a fairy godmother to make me look like Marilyn Monroe. I had no boobs, no hips, and I wanted it desperately.”

What she wanted was all around her: fuller-figure models with names nobody remembers, many of them middle-class or upper- crust older girls biding their time before landing husbands. Absent any of that, what Twiggy had was extreme youth, a thirst for fashion and triple-layered false eyelashes that fed her right into the decade’s social revolution alongside the Beatles and pop art.

Now 60, she remains a one- name wonder with a joyous laugh, a gift for chat and a homegirl cockney accent. She’s achieved, slightly, some of those coveted curves, but she hasn’t lost her edge. The singer, dancer, actress and author isn’t done just yet.

Twiggy will soon hit HSN with an affordable line of skinny jeans, ruffled blouses, gypsy skirts, jackets and accessories in bold colors and price points of under $100. That, she said, would have pleased her younger self, who saved up spending money to splurge at London’s popular Biba boutique.

“I’ve always had the strong belief that fashion should be for everyone, not just for wealthy people,” said Twiggy, lounging on a white hotel settee between Union Jack accent pillows. “Lots of people can’t afford to spend lots of money on clothes, and they should have nice things, too.”

Lots of people who wear lots of different sizes. The “Twiggy London” line will be available up to around size 20, said the creator, who cites genes — not starvation — for the rail-thin look that made her the face of 1966 at age 16.

It’s not the first time Twiggy has indulged her interest in design, or remote shopping. Her “Twiggy Collection” of last decade was sold online through the portal Great Universal.

There were other home- shopping ventures as well. Back in the ’60s, she put out a line for teens but left it in the dust of some bad business partners after three years.

“We were very green then. We’re a bit wiser now. A little bit older, a little wiser,” she said with a laugh.

The youngest of three girls, she was born Lesley Hornby in north London’s Neasden to a carpenter dad and a factory- worker mom who also worked a Woolworth’s counter to earn extra money. At 5 feet 6 inches — short for a model — Twiggy weighed only 91 pounds when she exploded into the culture.

Working Saturdays as an assistant in a hair salon, she met Nigel Davies, who became her boyfriend and manager, changing his name to the flashier Justin de Villeneuve. They arranged for a hairdresser to engineer her androgynous ‘do for photos he put up in his salon. The shots were spotted by one of his clients who wrote for the Daily Express and splashed Twiggy across two pages to launch her career.

By 1967, she was on the cover of Vogue, jetting around the world working six days a week and spreading the London look to America, where knee-length hems and pillbox hats inspired by Jackie Kennedy were still the norm when she made her first visit to the U.S. that year.

Before she was discovered, she was already painting on tiny lower lashes — “my twigs” — to help make her eyes look as large as tea saucers. Her look was perfect for emerging unisex trends and ever-rising hemlines, but it opened the debate still raging over whether skinny models promote an unhealthy body ideal, especially for young girls.

“It was debated when I hit the headlines and I always came out and said that I was very healthy, which I was, and always ate, which I do. I love my food. I just come from a lineage. My dad was very slim, so it’s kind of in the genes really,” she said.

In today’s crowded model marketplace, where competition is far more fierce than when Twiggy came up, girls have died as a result of starvation. She thinks the publishers of fashion magazines, booking agents, modeling agencies and designers all share responsibility.

“They ask for these girls. It’s gotta stop. I don’t know how you go about it, so the debate goes on,” she said. “The agencies have to protect these girls.”

Twiggy’s interest in fashion design was stronger than modeling ever was.

“I didn’t plan to be a model. I thought the world had gone stark raving mad,” she said. “I was used to being teased at school for being so skinny and I thought I was really funny looking, but I was obsessed with clothes.” She retired from modeling in 1970 after four years, joking at the time: “You can’t be a clothes hanger for your entire life.” She moved on to stage, films, TV and singing, earning two Golden Globes and a Tony nomination. The ultra-skinny look remains dominant in fashion.

“Twiggy will be an icon until her dying day and beyond,” film director and writer Ken Russell, who cast her as Polly Browne in a musical adaptation of “The Boy Friend,” told The Biography Channel in 2007.

Twiggy spent four seasons as a judge on “America’s Next Top Model.” There was also a memoir, a book on looking good at 40 and a return to modeling in 2005 for the British department store chain Marks & Spencer.

And there was her daughter, now 31-year-old Carly, a textile designer for Stella McCartney who made a scarf in a repeated hummingbird motif for her mother’s HSN line that launches Saturday.

Twiggy cites teen innocence and solid supervision for not succumbing to the more destructive aspects of the era that made her famous.

“My dad was always a very strong presence in my life. He instilled a kind of being down- to-earth, being sensible, especially when this whole thing happened to me,” she said.

How does she see it now, looking back over the last 44 years? “It was just so weird,” she said. “I was this funny little kid from working-class London. It could have gone horribly wrong.”