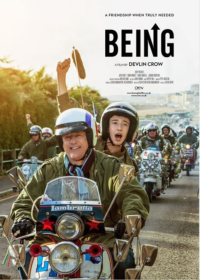 MODS OF YOUR GENERATION·TUESDAY, 19 FEBRUARY 2019Devlin Crow is a film director and artist, who has made a series of renowned, award winning short films. Has worked with Pete Townshend, Nick Cave, Sir John Tavener, Christopher Lee and among others.Brighton Palace Pier unveiled a commemorative plaque to celebrate his most recent film Being, that has a nod to The Who’s Quadrophenia and shines a light on young carers and the neurological condition Multiple Sclerosis. BBC filmed the event and covered it in news. The film has received many positive reviews and as myself and many others look forward to the Follow up go for it girl. We asked Devlin Crow if he would kindly do an exclusive interview for the Mods Of Your Generation community.

(1) As you have said before in various interviews your inspiration for writing a film about Multiple Sclerosis was caring for your wife who suffers with the condition. Was this a difficult process as the subject was so close to your heart?

When you have to dig deep and open you heart to something close, moments can be difficult as your tapping into the uncomfortableness of grief, the remembrance of your love one struggles with the daily condition and what has been taken away by M.S. These times are never without sadness as you writing about emotional experiences the ups and downs of caring and witnessing the cruelness of the neurological condition. Though through the adversity there is always a crack of joy and fleeting happy memories that challenges the darkness of the subject, I think this is conveyed in the writing and film, and in-turn a truth, honesty and a humanity wins out.

(2) Is there a reason why you choose The Who, Quadrophenia and the mod scene as “Buddy’s” escape from caring for his mother “Margaret.”  I wanted to make a film that acknowledged the importance Brighton, Modernism and The Who had on my youth and to “Quadrophenia”, the soundtrack that was central to my adolescence. It seemed right to make Buddy a Mod, who is into the whole 60’s scene, his mum Margaret would naturally passed on her love for the style, music to him. Buddy is also an individual, a bit of a loner and whom does not follow the crowd and popular trends. I think Buddy is like Jimmy in as much, that he’s angry and confused and in away lost. Though with Jimmy drugs and manic bipolar are his demon, for Buddy its feeling trapped as his life is on hold due to caring. With Jimmy, Modernism, scootering and Brighton became marred and the magic of the bank holiday bubble burst and disillusionment set in, for Buddy the Mod ride out saved him and gave him purpose a break from responsibility and demands, allowing him to experience joy and lost youth.

(3) Devlin you have directed a series of renowned, award winning short films, including Expelling The Demon, The Anatomist Notebook, Word Made Flesh:Sir Peter Blake, Little Whispers, Monstrous Creature & Of course Being. Did you face any challenges directing Being that you did not face with the other films?  Being was based on a real life situation and moments plucked from home life, whereas with the others they were fictional and had a element of the fantastical. Or in the case of the programme “Word Made Flesh” presented a portrait of the artist Sir Peter Blake.  (4) You have Worked with Pete Townshend in the past. What did you work on together and how was it?  Kennedy my partner and I worked on documentary on the English Pop artist Sir Peter Blake, Pete Townshend loved the film and composed an original score. He worked for a week on it, it was a very special moment to work with someone you admire and respect for his artistry and grew up listening to. I will never forget him playing a bit of Baba O’Rilely on the guitar to both of us, as he used some of this in his opening arrangement.

(5) Being has had many positive reviews and I am looking forward to the follow up and so are many others. Can you give us a sneak peak into the plot for Go For It Girl? Or will we just have to wait?  At this stage all I will say is that Margaret, Buddy’s mum get politicised and starts fighting for her rights. Also there going to be a strong Mod element running through feature, fans of “Being” will not be disappointed.  (6) Many people have been inspired by Being and it has highlighted two important issues. Can we expect the same from Go For It Girl?  Yes “Go for it Girl”, will be topical and will cover some important issues, though I stress the film will celebrate the importance of friendship and loyalty. Increasingly in this fractured world with so much hurt we need uplifting stories to highlight some beauty and love.

(7) You have said on Social media that you have happy memories meeting with Mark Wingett at Bar Italia “drinking good coffee.” Did Mark Wingett have much input into the storyline and what influence did he have on the making of the film?  Mark Wingett did not add to the story, this has already been finalised. We spoke about logistics of filming scooter scene, he put me in touch with Trevor Laird for his guest appearance and we spoke about the issues film raises. Over good coffee we spoke about the Quadrophenia shoot and The Who, it was special to hear Mark’s stories, he’s a raconteur when it comes to a tale. We will have to return to Bar Italia prior to “Go for It Girl” going into production seems only fitting to keep up the tradition.

photo (c) Devlin Crow – Being 2019 (8) When should we expect Go For It Girl to be complete & will it also feature on Blu-Ray.  The script has been written and I will be approaching a digital channel and private backers hopefully for finance, rather than the Crowdfunding route. You need a largest budget for a feature, I know how much love there is for “Being” and public are willing to support as they want the feature to get the green light. However I could not expect financial support through Crowdfunding for it will be a three figure sum. When it is released it will come out on Blu-ray, DVD and will be streamed. If Being Buddies keep sharing news on “Go For It Girl”, following and liking its social media sites, we can gain a strong media presence for a theatrical cinema release. Im sure you would love that!

photo (c) Devlin Crow – Being 2019  Thank you for agreeing to do this interview and I look forward to the feature of go for it girl.Mods Of Your Generation Community- Please like and share the interview far and wide. I would also like to take this opportunity to thank everyone who likes the MOYG page and to invite you all to like the Being film Page & I also encourage you to join Being Buddies Group to keep up to date about latest news on “Being” and “Go For It Girl”.Being Buddies GroupBeing Film Page