The Scuttlers of Manchester

Waging turf wars with knives and belts, teenage gangs with a ‘ferocious love of fighting’ horrified civilised society. The date? 1870. A new study of ‘The Scuttlers’ of Victorian Manchester reveals that gang culture dates back almost 140 years.

First of the gangs? Convicted Scuttlers

Out of the grime and squalor of industrial Manchester, emerged Britain’s first youth cult. The Scuttlers were the ‘hoodies’ of their day: teenagers who dressed alike and shared a thirst for recreational violence.

Their turf wars waged by gangs such as the Bengal Tigers and the She Battery Mob  are described in detail in the book: ‘The Gangs of Manchester: The Story of The Scuttlers.’

We spoke to its author Andrew Davies, senior lecturer in History at the University of Liverpool:

So who or what was a Scuttler?

“A Scuttler was a gang member. The term ‘Scuttler’ was devised by young people who were taking part in gang conflicts but it was passed on to the magistrates at some of the early trials of gang members and at that point the local press became very interested in both the new term and what looked like a new and very dangerous pastime.”

“Yes, it was a way of life, with its own fashions, its own language, its own code of conduct and it was very, very visible on the streets of Manchester in the 1870s. But it really shocked local civic and religious leaders who hadn’t come across anything quite like this before and didn’t know how to make sense of it.”

And the Scuttlers had a kind of uniform…

“Yes, the fashions were very distinctive. The Scuttlers’ haircut was described as a ‘donkey fringe’: hair cropped very closely at the back and sides but with long fringes at the front that were longer on the left hand side than the right. They also wore neckerchiefs which might vary in pattern or colour and that would be used to denote membership of a particular gang: there are a few surviving photos in which the neckerchiefs look, ironically, very like modern day Burberry! The Scuttlers also wore bell-bottom trousers and, though many adults at the time wore clogs in Manchester, the Scuttlers’ clogs had a brass tip on the end. They would have made quite a clatter on the cobbles.”

Why did they fight?

“The Scuttling conflicts were all about local pride and were organised as neighbourhood-based fighting gangs. They weren’t criminal gangs in the conventional sense. I think that Scuttling was very much about carving out an identity in what were these very densely populated districts. So it was about a sense of locality with young people trying to prove that their neighbourhood was the toughest one in town. So a lot of status or kudos rested on that.”

“Toughness, the resort to fighting to prove your mettle, and also the fierce pride in territory… I think all those ingredients are still there today”

“Yes, the pride in toughness, the resort to fighting to prove your mettle both as an individual and on behalf of the gang, and also the fierce pride in territory – I think all of those ingredients are there today and in studies of football gangs. And of course the importance of fashion is paramount today as it was then. I was very struck by the description of Scuttler fashion of the 1880s – they were staggeringly close to the fashions of the Madchester era. You could imagine a Scuttler finding himself at a Happy Mondays concert a hundred years later and blending right in.”

So what was it that gave rise to Scuttling and this passion for extreme violence?

“It seems that the practice was somehow ratcheted up as Manchester became more heavily industrialised. You’ve got huge problems of overcrowding in the poorer districts with tens of thousands of people crammed into very close proximity in areas like Ancoats, Angel Meadow, Collyhurst and Salford. What that seems to have done is to have injected a new vigour and ferocity into the fights between competing sets of young men which had always gone on but never with this intensity of violence.”

“Yes. At the time, very large numbers of youths were sent to jail. In the first 12 months of the so-called Rochdale Road War of 1870-71, around 500 Scuttlers were convicted and members of the local council were growing quite alarmed at the sheer number of 12 and 13-year-old boys who were languishing in prison. So, the resort to imprisonment was made very early with sentences being handed out of 15–20 years. And somewhat to the astonishment of the authorities, this wasn’t enough to stamp the practice out.”

So why did Scuttling come to an end?

“What changed in the 1890s was the development of the Lads’ Club movement in Manchester and Salford, set up by local philanthropists and targeting those areas most infamous for their Scuttling gangs. For instance, Ancoats had four Lads’ Clubs established in a period of five years. Where they were very successful was in working with 12, 13 & 14 year olds – those lads of school leaving age who might have been expected to form the next cohort of the Scuttling gangs and getting those younger lads involved in educational and craft training and, more importantly, in new forms of leisure and sport and, most of all, football. So I think the Lads’ Clubs must have played some part in disrupting the supply of recruits into the gangs and also by promoting sport as an alternative form of competition between lads from different streets and neighbourhoods.”

So what do you conclude from your research?

“What’s very striking is that, looking at the records of Scuttling over a 30-year period, you seldom find a clerk or an apprentice being arrested. It was always those lads in that huge swathe of society for whom there were very few opportunities, and had no political rights. So if you like, staking out a claim to territory was one of the very few opportunities to ‘be somebody’ and be respected – even if that was to be feared.

“I think it’s no coincidence that when we get reports of gang activity today and knife or gun crime, they still tend to be clustered in those areas where young people, I would say, still have far fewer educational opportunities and poorer prospects in the labour market than their counterparts might enjoy in more affluent areas of Greater Manchester. That was the case in the late 19th Century and I would say absolutely remains the case today.”

‘The Gangs of Manchester: The Story of The Scuttlers’ by Andrew Davies

In the distinctive language of British journalism, the English football fans who caused so much trouble in Marseilles variously “went on the rampage”, “ran amuck”, were guilty of “thuggish behaviour”, or “caused mayhem”. They were variously described in news stories as louts, yobs, thugs and ruffians, but the word that was universally employed was hooligan.

It’s an odd word, which the Oxford English Dictionary says started to appear in London police-court reports in the summer of 1898. It became instantly popular, with several compounds appearing in newspapers within weeks (a sure sign of acceptance), including Hooliganism, hooliganesque, Hooliganic, and the verb to hooligan, of which only the first has survived. The long-defunct London newspaper the Daily Graphicwrote in a report on 22 August that year, “The avalanche of brutality which, under the name of ‘Hooliganism’ … has cast such a dire slur on the social records of South London”. The word soon reached literary works; Conan Doyle employed it in The Adventure of the Six Napoleons in 1904: “It seemed to be one of those senseless acts of Hooliganism which occur from time to time, and it was reported to the constable on the beat as such”, and H G Wells included it in his novel Tono-Bungay in 1909: “Three energetic young men of the hooligan type, in neck-wraps and caps, were packing wooden cases with papered-up bottles, amidst much straw and confusion”.

Several suggestions have been made about its origin that link it to the Irish family name variously spelt Hooligan or Houlihan. It seems there was a popular music-hall song of the period about a rowdy Irish family of that name; the OED comments that there was a series about a similarly-named comic Irish character that appeared in a periodical called Funny Folks. Some reports say it was a mishearing of the termHooley’s gang but nobody has come up with a source for this.

However, a book by Clarence Rook named Hooligan Nights, which was published in 1899, gives some helpful evidence. Mr Rook claimed that the word derives from a Patrick Hooligan, a small-time bouncer and thief, who lived in the Borough, on the south side of the river. With his family and a small gang of followers he frequented the Lamb and Flag public house in Southwark (not to be confused with the older and more famous hostelry of the same name across the river in Covent Garden). Mr Hooligan murdered a policeman, was put away for life and died in prison. Another writer, Earnest Weekley, said in his Romance of Words in 1912: “The original Hooligans were a spirited Irish family of that name whose proceedings enlivened the drab monotony of life in Southwark about fourteen years ago”. It would seem from the other evidence that spirited and enlivened are euphemisms.

Whatever its origins, it quickly became established. At first this was most probably because of its novelty and news value. Later, as its sense shifted slightly, none of the possible alternatives had precisely the undertones of a (usually young) person, a member of an informal group, who commits acts of vandalism or criminal damage, starts fights, and who causes disturbances but is not a thief. Last week’s newspaper reports show that it continues to serve a useful purpose. 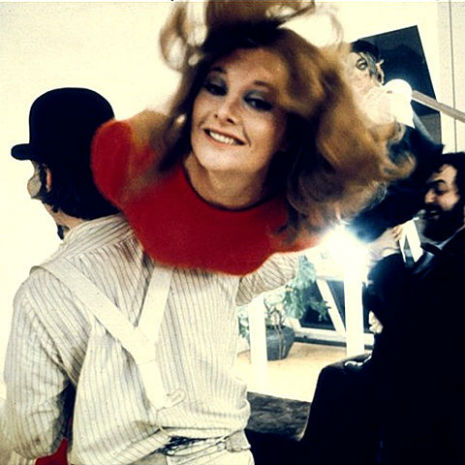 BEHIND-THE-SCENES OF ‘A CLOCKWORK ORANGE’: STANLEY KUBRICK AND HIS DROOGIE BUDDIES   “I’m going out with my droogs to the cinny to shove a pooshka into the grahzny bratchny.” A round up of some behind-the-scenes photos from the set of Stanley Kubrick’s A 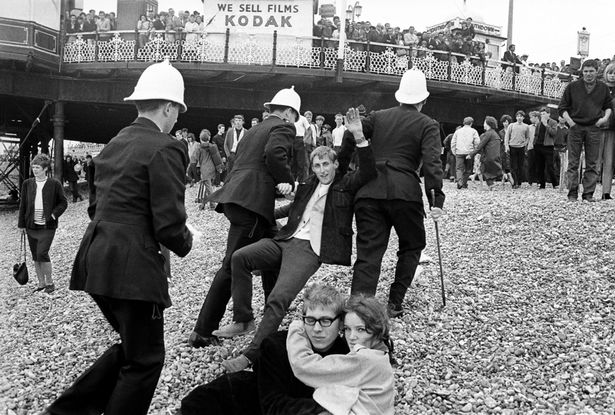 50 years ago the nation was shocked by violence which accompanied our first true youth culture. One man at the notorious Brighton brawl looks back on the chaos The bank holiday began with tourists flocking to the coast but ended with 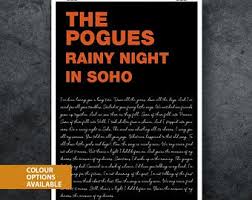