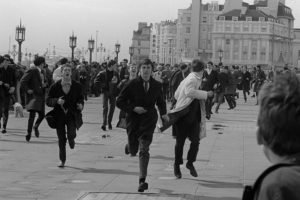 They may now be retired grandfathers, but that didn’t stop these two former Mods climbing aboard their scooters and heading for Brighton.

Fifty years ago today John Pedrick and Adrian Tincknell were part of the bloody seafront confrontation between the Mods and Rockers that became part of 60s folklore.

More than 1,000 youths clashed on the seafront on May 18, 1964, as police fought to control running battles that saw more than 70 arrests and deck chairs used as weapons by the warring groups of youths.

I’ll deck you! Adrian Tincknell, 69, and John Pedrick, 67, met at the spot where the Mods and Rockers battled

But with the combatants now pensioners there was only good natured banter as they shared an ice cream with bikers who had also headed for the city to mark the anniversary.

Mr Tincknell, a former mechanic, is now 69 and still owns a Lambretta scooter and dresses in Mod gear.

After riding into Brighton from his home nearby in Worthing, West Sussex, he said: ‘Once a Mod, always a Mod. I had to be here.Share

‘On that fateful day 50 years ago I was keeping out of trouble up a lampost on the seafront watching the mayhem when my father spotted me.

‘He was a Brighton policeman at the time and he ordered me to go home. Needless to say, I didn’t. There was too much going on.

‘I still love riding my scooter and dressing in Mod gear. We are all too old to fight now, it has all been very peaceful with lots of banter over a cup of tea with the lads on their motor bikes.’

Mods and rockers fighting on the beach at Brighton in 1964

Mods at the opening of the 1979 film Quadrophenia, about the Brighton battle

His best friend John Pedrick, now 67 and a retired insurance assessor living in Chichester, West Sussex, rode the same model Lambretta scooter along the promenade in Brighton where 50 years earlier he had run into the sea to escape the fighting.

‘It’s all very friendly today but it was pretty violent back then. I was a footballer in those days so I could run fast enough to get away, something I’d struggle to do now.

‘And the only safe place was in the sea. I can’t believe it has been 50 years. I’m still a young Mod at heart and thankfully things are much more chilled out now.’

Mr Tincknell (right) is a former mechanic, is now 69 and still owns a Lambretta scooter and dresses in Mod gear

The pictures of the battles along the seafront and pavements in Brighton on that Whitsun bank holiday in 1964 became iconic symbols of the era.

The courts were busy for weeks afterwards dealing with the 75 youths arrested and the skirmishes were later immortalised in the film Quadrophenia.

Morality campaigner Mary Whitehouse said she was ‘disgusted’ with mass brawls she blamed on youngsters watching violence on television.

For the 50th anniversary in the sun the fighting had been replaced by a seafront Mini Car Rally and a performance by a group of Morris dancers.

THE BATTLE OF BRIGHTON: MODS VS ROCKERS IN 1964

Fifty years ago, in the spring of 1964, simmering rivalry between the groups reached a flashpoint as they clashed repeatedly on seaside piers and promenades across the country.

But the worst of the violence was seen in Brighton, as families were trapped in a shocking showdown which sparked moral panic about the state of British youth.

Tensions had been rising for some time. The Rockers were usually in their 20s or 30s; Elvis-loving bikers rooted in 1950s Teddy Boy culture.

The teenage Mods’ culture, which flourished in the early 60s, was based on continental clothes, Italian Vespa and Lambretta scooters and the music of soul and jazz musicians.

They first clashed that spring on the March bank holiday in Clacton. At the Essex resort 97 people were arrested and the battle lines were drawn.

After that, trouble flared from Bournemouth to Margate, up to the bank holiday of August 1964. But Brighton’s Whitsun clash was the most notorious, thanks to sensational headlines and its immortalisation in Mod flick Quadrophenia.

Battles ran well into the night but although there were weapons – knives, chains and makeshift knuckle dusters – most scuffles involved fists and boots.