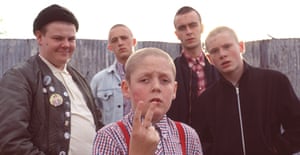 This is England. Shane Meadows

Forget shoulder pads and Rick Astley – growing up in the 1980s was a riot of great music, fashion and subcultures, as new film This Is England shows. Here, director Shane Meadows recalls a youth of ska music, scrapping and a time when people ‘still cared’ about politics

It’s easy to laugh at the 1980s. Many people base their memories on the stuff they see in those I Love The 80s TV shows: massive VHS recorders, Atari consoles and rubbish digital watches, all shown against a backing of Now That’s What I Call Music Vol 2. Then there was the way that people dressed: your mum with a deranged perm, your dad in a pair of grey leather slip-ons and your sister with a “Frankie Says Relax” T-shirt and a stack of love bites round her neck.

But my memories have more meaning than that. As a kid growing up in Uttoxeter, Staffs, it was a time of great music, brilliant fashion and a vibrant youth culture that makes today’s kids look dull and unimaginative by comparison. It was also a time of massive unrest when British people were still prepared to fight for the stuff they believed in. My new film, This Is England, is about all of these things.

Set in 1983, this is the first period film I have made. A great deal of it is based on my own childhood and I tried to recreate my memoirs of being an 11-year-old kid trying to fit in. It was a time when Uttoxeter, like the rest of the country, was awash with endless different youth tribes. There were new romantics, heavy rockers, smoothies, punks, goths, skins and mod revivalists who were into the Specials and 2 Tone. Then there were those pop culture kids who came into school wearing one green sock, one pink sock and some deely boppers on their head. People often looked daft, but were genuinely committed to their chosen denomination and would wear their identities on their sleeves with immense pride. In a town as small as Uttoxeter, though, there weren’t enough people for each sub culture to fill their own parties or clubs, so most weekends everyone would turn up at the same village hall disco and end up fighting.

Like most 11-year-old kids who wore jumpers with animals on, I got bullied by the older kids at school. So I looked for my own tribe to join. It was the skinhead movement that enamoured me the most. I remember seeing 10 or 15 of them at the bus shelter on my way home from school one summer night and thinking they were the most fearsome thing I had ever seen. Even though I was terrified of them, I was instantly attracted to them. To be a part of most of the other factions you had to be a little rich kid. But to be a skinhead, all you needed was a pair of jeans, some work boots, a white shirt and a shaved head. You could be transformed from a twerp into a fearsome warrior in 15 minutes. Skins appealed to me because they were like soldiers: they wore their outfits like suits of armour and demanded respect. There were playground myths that surrounded them and especially their Dr Martens boots. It was feared that a single kick from a DM boot would kill you or at the very least give you brain damage. I can remember kids refusing to fight unless the skinhead agreed to remove his fearsome boots first.

My older sister was going out with a skinhead who took me under his wing and taught me about the roots of the whole culture. He was a nice bloke who bore no relation to the stereotypical racist yob that people now associate with that time. It was him that I based the character of Woody on in the film. I learned from him that skinheads had grown out of working class English lads working side by side with west Indians in factories and shipyards in the late-60s. The black lads would take the whites to blues parties where they were exposed to ska music for the first time. Soon, Jamaican artists like Desmond Dekker, the Upsetters and Toots And The Maytals were making a living out of songs aimed directly at English white kids. This was where the whole skinhead thing came from – it was inherently multicultural. But nowadays when I tell people that I used to be a skinhead, they think I’m saying I used to be racist. My film shows how rightwing politics started to creep into skinhead culture in the 1980s and change people’s perception of it. This was a time when there were three and a half million people unemployed and we were involved in a pointless war in the Falklands. When people are frustrated and disillusioned that’s when you get extremist groups moving in and trying to exploit the situation. That’s what the National Front did in the early-80s. Skinheads had always taken pride in being working class and English so they were easy targets for the NF who said that their identities were under threat. They cultivated a real hatred of the Asian community. In the film, Combo represents the sort of charismatic leader the NF used to turn skinheads into violent street enforcers. Suddenly, all skinheads were branded the same way. But most of the real old skins who were into the music and the clothes went on to be scooter boys to separate themselves from the racism. I always wanted This Is England to tell the truth about skinheads.

As I started to make the film, other themes started to interest me. We had a relatively small budget so we couldn’t afford to recreate every last detail of the Uttoxeter of 1983. Instead, I set the scene by using archive news footage at the start and end of the film. Going though footage of the Falklands war really made me think again about the whole thing. As kids, we thought it was like going into a World Cup campaign. It was exciting and we were cheering on our lads to go and do the Argies. But the scenes of soldiers’ coffins shocked and appalled me.

In many ways the country was a mess. The miners’ strike was massive – they were killing scabs by throwing paving slabs from bridges onto cars. You had all the protesters and unrest at Greenham Common. But remembering all of these things made me nostalgic for a time when people were ready to stand up and say something. People cared about where the country was going. As the 1980s ended we had the poll tax riots which turned out to be the end of an era. Afterwards, it was like the nation lost its backbone. People were bought off. They were given a little bit of land, the right to buy their council house and put a little satellite dish on the front of it. They became content and lost their will to rock the boat.

The big difference between now and the period in which my film is set is our level of isolation. In 1983, people still cared about society as a whole but now they’ll keep their mouth shut as long as they’ve got the house, the job and the car they want. If you were a kid in 1983, you wouldn’t have a PlayStation to sit indoors alone with. You got your entertainment from mixing with a variety of different people. While making the film, I realised that all of my fondest childhood memories surrounded human contact: mucking about with mates or going camping. In 2007, people put less emphasis on that sort of thing and more on planning their careers and their TV viewing. As far as I’m concerned, if you’re working from nine to five then coming home to watch shows that your Sky box has recorded for you while you were out, you might as well be on a fucking drip.

This Is England is a snapshot of an era and a life that seems very dated now. It’s about sticking up for mates and beliefs.

This Is England’s tight group of mates are stranded in a drab, east Midlands town in 1983. Devoted to sharp dressing, ska music and each other, the warmth and harmony of their gang is threatened by the arrival of Combo – an older skinhead with an angry, racist agenda.

The gang’s token Boy George-alike becomes the object of young Shaun’s affections. Kindly, she gives him his first kiss.

Firm but fair leader of the girl-skins and girlfriend of Woody. Also the subject of unwanted advances from the sociopathic Combo.

An isolated 12-year-old whose dad has been killed in the Falklands War. His transformation into a skinhead offers him a whole new life of friendship, DMs and braces.

The gang’s only black member becomes a target of abuse as certain members start to embrace the National Front.

A warm hearted leader who nurtures Shaun into a fully-fledged skin. He splits from the gang when Combo shows.