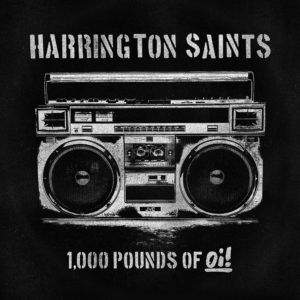 The Harrington Saints are an amazingly talented bad with members who all have other massive side projects. Up until now most of their songs have been about your classic punk and skinhead topics. You know? The same “rah rah we are West Ham” coming from some guys in California is a bit hard to grasp. What I bet you didn’t know behind all the mod influence and skinhead style music. There is a lot of heart and emotion that comes out of this band. I’ve been a fan for a bit and “1000lbs of Oi” is one of the best albums of it’s genre in the last five or so years.

“State Of Emergency” is something you would expect from Bad Religion not Harrington Saints, and that is NOT a bad thing. The song is about gun control and the lack of empathy Americans have for dead kids. It seems more important they have their guns. Instead of sugar coating it behind flowery language like Bad Religion does often. This is a raw as a nerve end track.

There are some classic oi songs, like the title track. These guys are not small humans so the “1000lbs of Oi” is a little bit tongue and cheek. I love it personally as a somewhat larger lad. Rock N Rolla is a splitting oi track that brings you back to the 1980s.  However the highlight to me was the song “Fremount Train” about a very real incident that happened. This isn’t your typical “fuck Nazis” song. It’s about beating the fascists up, and walking away with a smile with blood on your hands because you know you’re in the right. One of the most poignant lines being “why is the right wing always on the wrong side of history? Why is this a lesson we still have to teach today?”

If you don’t have a copy of this record it’s available on bandcamp, iTunes as well as Pirate’s Press Records…..or you know where ever awesome records are sold.

Check out this awesome tune