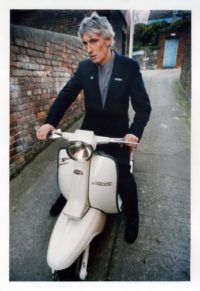 Mods Of Your Generation Interview – Irish Jack Lyons – 40th Anniversary Of Quadrophenia MODS OF YOUR GENERATION·FRIDAY, 28 SEPTEMBER 2018· Mods Of Your Generation conducted an interview with the legendary “Irish” Jack Lyons to celebrate the 40th Anniversary of Quadrophenia the film. The man who inspired Pete Townshend to create the film, We would like to thank Jack for his contribution to Quadrophenia and to the Mod scene. Also a massive thankyou for answering some questions for the MOYG Community. To conjunct with the filming in 1978 which is the 40th anniversary of FILMING not film release, Irish Jack started having meetings with Franc Roddam until just after the end of August. Moon died on 7 September while he was taking a week’s break back in Cork, He flew back the next morning. He started writing scripts for official screen writer David Humphreys round about the second week of September. The first camera ran on 28th September and the legend of Quadrophenia begun.

(1) As many Quadrophenia Fans are aware Jimmy the main character from Quadropheina was based on you. Were you similar to Jimmy in the 1960’s and do you think Phil Daniels played the role well? Yes, I’m a lot like Jimmy. Speed-freak skinny and a born chatter-box. More than 10 have said there’s a facial resemblance. As you will remember from the article you posted about my meeting up with Phil Daniels at Lee International production offices in Wembley, he hadn’t a clue about Mods and he was honest enough to tell me. All he wanted to know was now that he had been casted to play Jimmy/Irish Jack, all he wanted to know was had I ever slapped a copper. Jimmy was a bit of a failed mod. Yes, he had the scooter but like a lot of us at the time it took a rocker friend to fix it for him and he couldn’t hang to to his girl…AND he couldn’t fight. I was a lot like that. Girls scared me to death cos I never knew what to say and I got in a scuffle actually with another mod and I discovered that I didn’t have the right body shape to fight. Not everyone can fight. When I’d be on French Blues I could talk to any girl all night as long as the conversation was about Pete Townshend or The Who. Mod was not always about being the Ace Face, Mod had a lot to do with young guys trying too hard to fit in, lacking in self-confidence and asking themselves the eternal question…’What’s gonna happen to me?’

(2) Quadropheina has played a major part in many people’s lives and many young people can relate to Jimmy’s Character growing up. Who could you relate to growing up and what movies or bands influenced you? I bought my first record when I was 13 in 1956. I was back in Cork then and attending school. My mother bought me Elvis Presley’s ‘Hound Dog’ with ‘Don’t Be Cruel’ on the b-side. It was a thick ’78 and if you dropped it it smashed into a thousand pieces. I used to be in awe just watching the RCA label rotating on our old record player. My dad was a classical violinist and of course as you’d imagine if he thought his eldest son was playing the devil’s music and using a sweeping brush with string as a guitar he’d have turned purple. I could only play it while he was out. Living in Cork back then in 1956 there wasn’t really any bands or films affecting me, I was by then only a year in long trousers having made my Confirmation the year before. I did spend a lot of time then recording my father on our old Bush tape recorder…wide spools and control buttons the size of piano keys playing classical pieces on his violin. I was 13 and I was an unpaid sound engineer! (3) When moving to London from cork were you a mod before moving and was there a mod scene in cork at that time? No, there was no mod scene anywhere. I moved back to London when I was sixteen-and-a-half in August 1960. Mods didn’t appear until late 1962. (4) What is your favourite genre of music? I don’t have a favourite genre of music. I’m affected by all strains of music. Like a lot of people, I fall in love with certain songs and then something else comes along. For years I was hung up on Jarvis Cocker’s Disco 2000, his biographical account of Deborah, the way he made it sound so personal just threw me across the room. I learned later that Deborah is actually a real person…like all good songs. Common People by Jarvis (well, Pulp) is just another of his great songs. It’s the way he narrates those two songs into biographic form, he is a brilliant song writer….AND story teller. I’m not a fan of rap the way it’s turned young people into rapping about rival neighbourhoods and knife crime. I can’t stand the way these gang rappers refer to their girlfriends and women in general. I think it’s a form of misogyny. (5) If there was a Remake of Quadrophenia who do you think would be a good fit to play Jimmy from today’s young actors. If there was a remake of Quadrophenia I’d turn in my grave. The acquired dictum is..’If its not broken – don’t fix it !’ Nobody is capable of bettering Franc Roddam. Nobody is capable of bettering Phil Daniels.

(6) How would you like to be remembered. How would I like to be remembered? With a blinding obituary in the Guardian (7) Is there other characters in Quadrophenia that were based on anyone from The Who. I don’t think so. Gary Cooper’s job as a sheet metal fabricator was obviously a nod to a younger Roger Daltrey who was a sheet metal worker for Chase in Shepherd’s Bush. (8) Do you like the track “Irish Jack” by The Who and how did you feel about a song being written about you. The problem with ‘Happy Jack’ was that you couldn’t dance to it. Pete wrote it when he was living in a top floor flat on the corner of Brewer Street and Wardour Street. I used to go up there. In those days you could park a car unlocked. Pete had a fabulous open top1963 Lincoln Continental which he’d leave outside the door overnight and it would still be there in the morning untouched. It’s strange to be answering questions about how I felt about a song like ‘Happy Jack’. There was no escaping it. It has never made me feel special. In 1973 I celebrated my 30th birthday having dinner with Pete at the Five Bridges Hotel, we were playing later at the Newcastle Odeon. I had far too much to drink and should’ve slowed down on the expensive French wine. At some stage I found myself playfully chinning Townshend and almost in the same motion playfully grabbing him by the lapels and saying….’Why the fuck didn’t you write…’And he lived in the sand in the Republic of Ire-land’…Pete grabbed me close to his face and snarled….’Because I couldn’t make it fucking rhyme….’ Loads of people have asked me about that song. Y’see, the problem with muse is that you absolutely don’t do this : ‘What a lovely afternoon. It’s supposed to last until tomorrow. Oh, by the way, I’m writing a song about you.’

(9) Is there anything else you feel should of been added to the film that was not captured by the scene at that time? Yes there most certainly is….before production finished I went to considerable lengths to impress upon Franc Roddam how cool it would be to end the credits with a list of names of the Mods who had frequented the Goldhawk as a tribute to them. We had dinner somewhere near the office in Beak Street and I had made a list of about 30 names that stood out. Franc’s response in that lovely Cleveland accent of his was that it was a master stroke and would give the film actual authenticity – like a roll of honour. He took the piece of paper away with him and I never saw it again. (10) Is there anything you would like to share with “Mods of your Generation” Community that they may not know about Quadrophenia, The Who and Your Relationship with them. Go to YouTube, type in the bar…’Modrophenia the legend of Irish Jack’