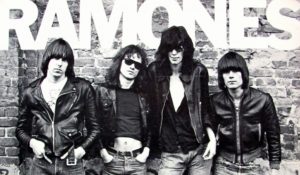 From its emergence in the 1970s, punk rock was a movement which concerned itself with the present. Its hallmarks were rock ‘n’ roll, a do-it-yourself attitude and a good sense of humor. As it spread from the U.S. to the U.K., it would also come to include a distinctive political sensibility. Many of the early punks were young people who actively sought to distance themselves from their upbringings, from any kind of ethnic ties, and to form new identities through their art.

Given the punk attitude of leaving the past behind and forging a new way forward, it seems counterintuitive to connect punk rock with Judaism. Yet punk, like many art forms to come out of New York City, has deep roots in Jewish history. From its origins with Jewish musicians in the 1970s to modern-day Jewish punk bands, the histories of Jewish culture and punk rock are deeply intertwined.

Many of the people involved in the original punk scene in 1970s New York were the children of working- and middle-class Jews. Their backgrounds ranged from overtly religious to secular and culturally Jewish, but all of them were formed by their Jewish backgrounds and would in turn bring those influences to their music and performances. These included not just musicians—such as Joey and Tommy Ramone, Chris Stein of Blondie, Lenny Kaye of the Patti Smith Group, Richard Hell, and all of The Dictators—but also managers, photographers, club owners and more. Punk might not exist as we know it without the Jewish club manager Hilly Kristal, founder and owner of CBGB, the club where many New York punks performed for the first time. Nor would it have made it to the U.K. without Jewish manager and Sex Pistols founder Malcolm McLaren. Jewish record company executives like Seymour Stein recorded the music, while Jewish photographers like Bob Gruen documented the scene for posterity.

However, despite the large Jewish presence in early punk, many were reluctant to discuss their Jewish heritage. Like many Jewish entertainers, quite a few punks took on less Jewish-sounding stage names (like Thomas Erdelyi and Jeffrey Hyman, who became Tommy and Joey Ramone, respectively), while others had their names changed by their parents in childhood, in order to better fit into the American middle class (as with punk godfather Lou Reed, whose father changed the family name from Rabinowitz). Some even went as far as denying or refusing to discuss their Jewish heritage. While for some this may have reflected their discomfort with their Jewish identities, many more undoubtedly did it as part of embracing punk’s freedom to recreate oneself. “The tabula rasa aspect of punk is one of the most important things about it,” says Vivien Goldman, who was a music journalist covering punk in the U.K. in the 1970s and is now the author of Revenge of the She-Punks, a book on women and punk. Although Goldman’s Jewish background is certainly important to her—her parents were Holocaust survivors, and she is a first generation British citizen—she believes that “to be a punk was to liberate yourself from what had gone before.”

This seemed to be the predominant belief among punks of the 1970s on both sides of the Atlantic. Jewish culture was rarely at the forefront of punk music, even if its creators were quietly Jewish behind the scenes. Some offhand references to Jewish culture crept into the occasional song, but these were “few and far between and largely subterranean,” says Michael Croland, author of the books Oy Oy Oy Gevalt!: Jews and Punk and Punk Rock Hora: Adventures in Jew-Punk Land. These references were largely secular and easy to miss, such as The Ramones’s reference to “kosher salamis” in the song “Commando.”

Something that did become part of the imagery for many early punks—Jews and non-Jews alike—was, counterintuitively, Nazi imagery. Young punks were known to wear swastikas and, particularly in the New York scene, collect Nazi memorabilia. The reason for this can seem difficult to grasp. “They weren’t serious [about being Nazis],” says Goldman, however she also adds, “I didn’t like it, and a lot of us didn’t like it.” One reason for the use of the swastika by U.K. punks, as Goldman and others have speculated, is that it was a way to rebel against their parents, the generation that had lived through World War II and had yet to stop talking about it. In America, Steven Lee Beeber speculates in his book The Heebie-Jeebies at CBGB’s: A Secret History of Jewish Punk that the use of Nazi imagery was a means for Jews to take back control of the narrative, to control former Nazi property, to play with it and poke fun at it as they pleased.

Starting in the 1980s, punk underwent a series of musical and cultural changes. By this point, many of the best-known original punk bands had either broken up or evolved their sound to fit punk’s new commercial market. However, their early work had permanently changed the music world, especially for young people, with new punk bands arising and the genre spawning new offshoots such as post-punk and new wave. Punk was disseminated beyond its original scenes, leading the musical style to be adopted for new purposes. This included, for the first time, Jewish punk bands who embraced their Jewish identity in their music, rather than relegating it to the background.

According to Croland, the first such band was Jews from the Valley, which arose from the L.A. punk scene in 1981. At the time, they were still somewhat of an outlier. While new punk bands like Bad Religion and NOFX carried the 1970s torch in having Jewish members while not making most of their music about Judaism, Croland says that Jews from the Valley began when “one guy was screaming along to ‘Hava Nagila’ one day and thought, ‘I should distort that and put that into a song.’” That guy was Mark Hecht, and the song and the band both became known as Jews from the Valley, and thus began the short-lived career of the first Jewish punk band. Their music incorporated well-known Jewish songs such as “Hava Nagila,” original songs with Jewish themes, and a good dose of Jewish/punk humor and offensiveness. The band broke up after just a couple years, and at the time, it seems there were no other bands making punk music explicitly Jewish.

The 1990s saw punk undergo yet more major changes. In the early and mid-90s, punk (or pop punk, depending on who you ask) became radio-friendly, with bands like Green Day and The Offspring mainstreaming the genre. Throughout the 1990s and 2000s, many pop punk bands rose to fame. The other major punk revolution of the decade was Riot Grrrl, a movement which combined punk rock style and aesthetics with feminist politics. Though women had been present in punk scenes since the beginning, feminism was now being brought to the forefront of punk politics, and all-female punk bands such as Bikini Kill were rising to prominence. On a somewhat smaller scale, Jewish identity also became a more prominent feature of punk, helped by the fact that Jewishness was becoming a more acceptable topic in popular music at large (a trend which Croland partially credits to Adam Sandler’s “Chanukah Song”). Though there was not—and is not—really a Jewish punk “scene,” the 1990s was the first time that multiple Jewish punk bands came into existence simultaneously.

Probably the most prominent example of such a band was the Australian group Yidcore. Formed in 1998, they put their Jewish identity at the forefront of their music and performances, albeit not in a particularly serious way. “They were all about shtick,” says Croland, “whether that was drinking Manischewitz wine out of a shofar, getting into food fights on stage with hummus or bagels or falafel, or using their songs to try to woo Natalie Portman.” They drew on the traditions of the early punk scene, not just in musical style, but also in their love of humor and irony, while adding an in-your-face Jewish twist which early punk bands lacked. The group stayed together for over a decade, becoming perhaps the best-known Jewish punk band.

In the 21st century, punk has splintered into many styles and subgenres, including the further development of “Jewish punk” and “punk-influenced Jewish music” as genres unto themselves. With punk so well integrated into the musical mainstream, it is hard to point to an insular “punk scene” such as that of 1970s New York, but instead, punk and its offshoots have spread out, both stylistically and geographically.

While Jewish punk continues to be a niche genre, several bands have carved out an unabashedly Jewish space in the modern world of punk. Moshiach Oi! is one such band. Formed in 2008 and still active today, the band performs songs with an overtly religious bent, made to showcase its love of Torah. In the realm of cultural Jewishness, The Shondes has become a successful punk band that is open about its Jewish roots. “I came into playing rock music through Riot Grrrl and queercore—radical punk movements that helped shape my aesthetics and politics at a really formative age,” says Louisa Solomon, the band’s singer. The Shondes’ music combines rock and radical politics with references to Jewish proverbs and melodies, a combination which came naturally. “We write as full people informed by all of our experiences,” says violinist Elijah Oberman. “Jewishness is one part of that, just as our experiences as queer or as women or trans/non-binary people are. Jewish stories and ritual are a part of how we’ve come to be who we are, and so are Jewish melodies.”

The Shondes at a seder in their new Passover-themed music video “True North” (Credit: Jeanette Sears)

Similarly, punk—both its aesthetic and its attitude—has permeated more traditional forms of Jewish music, including klezmer and simcha music. Younger musicians like Daniel Kahn grew up with punk as part of their musical taste. Kahn has taken aspects of punk and made them part of his klezmer-based repertoire, creating a self-described “radical Yiddish punkfolk cabaret.” Similarly, bands such as Electric Simcha have adapted aspects of punk to simcha music—traditional Jewish music played at celebrations such as weddings. Just as punk has influenced non-Jewish forms of music, forming such genres as pop punk, so too have there been multiple punk-y variations of Jewish music.

The fact that punk has been and continues to be influenced by Jewishness (and vice versa) speaks to the core concerns at the center of both cultures. In discussing why Jews continue to be drawn to punk, Oberman gets to the heart of one of their most essential similarities: “Jews are taught to wrestle with G-d, and to me that also means wrestling with our texts, our rituals, our traditions. When even the things you hold most sacred are always up for debate, I think that can lead to a level of comfort with deep questioning of how things are or are supposed to be. Pretty punk, yeah?”