The no wave legend has worked with Sonic Youth and Nick Cave, written books and created art. At 56, she still rages against the commercialisation of pop culture

Lydia Lunch takes the stage in Berlin. Gazing behind her black bangs into the front crowd at Urban Spree’s DYS Festival, she points her red nails through the dry ice, screaming: “Narcotics and psychotropics, ecstasy slips through my hands. I’m still searching for the drug – I need a year in a sexual coma to take care of my problems – I tried crack five times, I couldn’t get high.”

Even at 56, Lunch remains the voice of New York’s underground, from which she emerged in the late 70s as part of the no wave movement. A singer, poet, actor, visual artist and spoken word performer, she has no manager or PR agent – she’s even been homeless at points in her career.

“If you’re doing it for the money, you’re not doing art. You’re doing commerce,” she said. She says that being an artist is not a career choice, but a necessity “if your blood boils”. Even if spoken word performance is dying, it doesn’t stop her from being what she calls “the last war whore left”.

After 37 years on stage, Lunch – who got her name because she used to steal food for her friends, American punks the Dead Boys – is in discussion with various American universities and institutions to place her colossal archives of over 1,500 books, posters and diaries, unseen live footage, unpublished photos and fan mail, for public view.

“It’s everything I’ve ever done,” says Lunch over a glass of white wine in Berlin’s Michelberger Hotel. “I’ve been taking photos since 1990, each one needs to be scanned. I have letters from guys I don’t know – letters with bodily fluids. Thirty-seven years is a lot of time for creating. I want it all available.”

Lunch is now hosting a writing workshop with former Sonic Youth frontman Thurston Moore at the Jack Kerouac School of Disembodied Poetics, a Buddhist writing institute in Boulder, Colorado. She plays San Francisco’s DNA on 29 July and at Los Angeles’ Teagram Ballroom on 31 July. That same night, Lunch opens an exhibition of her photos in a two-woman show with Jasmine Hirst called Beautiful Wrecks at Los Angeles’s Lethal Amounts Gallery, where her black-and-white photographs of adolescent boys, All My Heroes are Killers, are on view. She then heads to Melbourne for the Supersense arts festival. Bloodworks, an anthology of her poetry, is slotted for release next year in France.

After Melbourne, Lunch will return to Woodstock to write her next book, a tome about sex which she says will stand in stark contrast to her previous work. “I’m into pleasure rebellion,” she says, lighting a cigarette. “I’ve shared all my misery and tragedy but in my personal life I’m a cheerleader, an optimist. That aspect of myself is not shared. Once you are free from trauma, you are going to luxuriate in pleasure and happiness – personal pleasure. A divine gluttony, I should say.”

For this book, she’s done “a lot of research with one person”, whom she declines to name. “It took me this long to find someone who is going to inspire what I think is going to be a great work of art and needs to enter literature. Sex is often portrayed so badly, 50 shades of what? It’s insulting, so shallow.”

Lunch fled New York in 2004 when Bush won a second term: “I couldn’t take it.” Based in Barcelona, she travels frequently to writer’s residencies and arts festivals and tours with her band Retrovirus. This nomadic lifestyle, she says, is why she is looking for a permanent place for her archives. Upbeat and garrulous, she has always taken a stance against mainstream pop culture and doesn’t hold back her opinions on corporate America.

“The celebrity of riches and being famous for doing nothing is a cycle and I hope one day there will be a cultural rebellion,” she said. “People will be sick of vacant, culturally bankrupt bullshit based on how much you paid for your dress or surgery. Will there be a generational rebellion? We can hope the next cycle will be anticorporate. Corporations have won – your worth is based on what you make, not what you do or what you say.

“Madonna and Lady Gaga have stylists who are cultural vampires who steal the ideas from the underground then elevate transgression to a mainstream,” she adds. “Complete fraudulence on every front. These are my enemies. That’s why I say: ‘You can call me Lady Gaza.’”

However, there are some musicians she does admire. Electronic musician Nicolas Jaar contacted Lunch as a fan, asking if he could remix a track from her 1990 spoken word album Conspiracy of Women (COW), which he reissued on his label, Other People. “He is doing something to support people,” she said. “He is the beginning of the cultural revolution of people his age. That’s where my hope doesn’t ever die.”

Born in Rochester, New York, in the 70s Lunch moved to New York City, where she founded Teenage Jesus and the Jerks. Along with bands like James Chance and the Contortions and Mars, the band were an integral part of the no wave scene – a raw, noisy and arty alternative to the more commercial new wave movement of the time, typified by bands like Talking Heads and Blondie.

As well as Sonic Youth, Lunch has worked with Nick Cave and Henry Rollins, with whom she co-starred in a short film called Kiss Napoleon Goodbye. She curated and starred in the work of artist Richard Kern. “A lot of the people I worked with were no more famous than I was, they just became more famous,” she says. “They did the same record 100 times, I did not.”

The new Retrovirus album Urge to Kill was released in May on her own label, Widowspeak, its nine tracks filled with meandering, scratchy vocals and wailing guitars. Lock Your Door is a vengeful breakup anthem, while Dead Me You Beside is infested with fuzz guitar. “I’m just a writer, I just use music as a machine gun to get the words across,” she said.

Despite her illustrious body of work, Lunch still feels like she’s had no cultural impact. “I always say ‘Don’t blame me for Courtney Love, she’s a trainwreck crash into a bank’. I know I’ve impacted individuals and that’s what’s important but I see no culture reflecting back the impact I’ve had.”

Nevertheless, she battles on and encourages others to do the same. Lunch has created a workshop called From the Page to the Stage, which helps writers perform. “Women should write stories, even if it’s for the exorcism of their own demons.

“People have always been afraid, I don’t know why. This is why I feel like I haven’t had a cultural impact otherwise women would be ranting on street corners and shouting and whispering. After 37 years, one can learn to master it.” 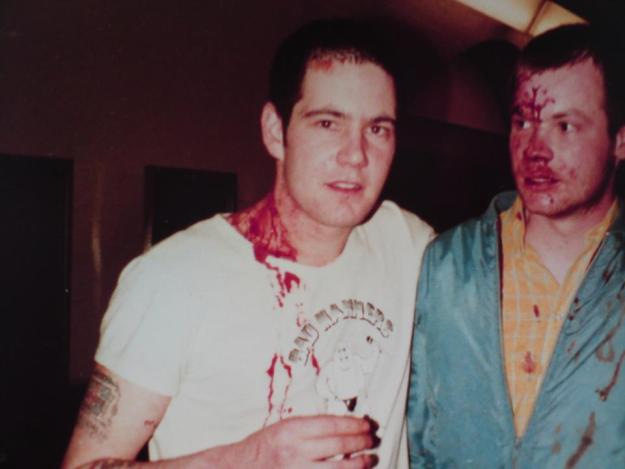 Trouble with Skinheads at UB40 Gig

Skinheads: the cult of trouble Skinheads streaming out of Camden Town underground tonight look hard and they know it. The crop is the style, but it can also be the weapon: it’ll nut you if you look too long or you