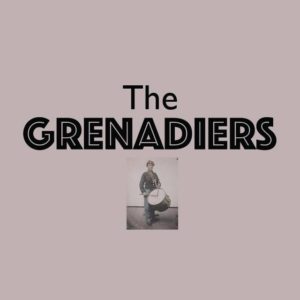 lead vocals and songwriter Kevin Sane from ‘The Grenadiers’ approached Mods Of Your Generation and wanted us to review their new album and feature in an interview. He kindly sent me a copy before its release. The band are in the progress of setting up social media platforms to promote the album and are seeking out a drummer to add to the line up. The band are also looking for a manger so that they can focus on their songwriting. Their previous album ‘Mr. Cribbins released by Detour Records received a lot of great reviews from fans and magazines appearing in The cult shindig and Heavy soul Fanzine magazine. The new album is just as great as the last with soulful 60’s melodies and a Rock n Roll riff. There is definitely a punk element in there too. While first listening to the album it is straight away apparent that the band are heavily influenced by The Kinks & The Small Faces. The lyrics are superb with a very British sound and feel like many people could relate. Tracks such as Ruby, Scooter Boys, No More Bets are ones that stand out. I highly recommend this album and wish the band ongoing success as they plan to promote the album and start building up a fan base. The album will be available on Apple Music, Spotify, Google Play & Deezer from 19th July 2019.

usually I sit down with a cup of tea and answer questions but on this occasion I am out of tea bags. have to settle for fellow birds coffee. the last gig I went to which I absolutely loved was watching The Stranglers play at the Cambridge Corn Exchange in 2017 . brilliant band .

(2) Which subcultures have influenced you?

which subcultures have influenced me. A lot of the time its from the 60’s and late 70’s early 80’s. very into Elvis Costello. I am a Big David Bowie fan but I love the music from the band The Cars.

(3) A song and band that has inspired you?

The song” Drive” by The Cars inspired me to write Crying out, its one of those universal songs that touch the soul.

(4) Where do you find inspiration for your song lyrics & music?

a lot of time my own experiences and watching or watching TV.

(5) How and when was the band formed?

The Grenadiers actually was a band I formed in Aberdeen. The Name came from my home town of Colchester being it has always been an Army barrack town

(6) Why the name ‘The Grenadiers’ and who come up with it.

The Name came from my home town of Colchester being it has always been an Army barrack town . it has its own military tattoo each year where all the different regiments parade down the high Street.

(7) Your first first EP which featured songs such as Mr cribbins/ Kosha / Mrs Raven/ Pillars Of The Lambeth Row/ Toy Grenadier. All are a great sound, how would you describe the bands style.

Its different and diverse . there are songs that are clearly heavily inspired by post new wave and then on the other spectrum we do quite a lot of 60’s inspired music.

(8) your first EP was released by the label Paisley archive records. Are you still signed to them?

know we are not currently signed to paisley archive records at the moment.

(9) The Band were invited to open up for The BlockHeads at Colchester Arts Centre. Which I briefed for the band was a huge honour. Can you tell me a bit about that?

The blockheads gig was amazing an absolute buzz. The Arts Centre was completely packed to the medieval rafters and the noise from the place. The atmosphere was electric. The Blockheads still cut the mustard and we played a blinding gig. I think Big Boys Don’t cry had its first performance that night and we nailed it. We couldn’t unfortunately stick around to enjoy the blockheads as we had to 2 gigs booked in one night so we played that gig in Colchester high street after our set list finished. An absolute great night, You just cant beat playing live really.

(10) The first EP had a lot of great reviews and was well received and featured in the music magazine Shindig. How did that feel?

The review in shindig magazine was weird . having your music reviewed then next to it you see Ziggy Stardust @ The spiders from mars on the same page. we are very proud of the Mr Cribbings EP. I wish now looking back it should have been called “Pillars of The Lambeth Row” but never mind.

(11) Your new album will be released soon. Where can fans buy or download it.

The release date for the album will be Friday 19th July on all online stores. I tunes / Spotify/ Instagram /apple music. Its our first album and all the songs have something appealing in themselves.

(12) Have you got any future gigs coming up and what’s next for the band?

Playing live is the next stage. Already have a true professional bass player by the name of Matt Hill and Gary Cochrane who are former members of the mod influenced group ‘Pure Mania’. Along with Dave Nevard, when we find a suitable drummer I think it wont be too long before our next gig will be announced.

(13) Who produced the new album Salute?

Two tracks ‘Ruby’and ‘Big Boys don’t cry’ were produced by Greg Haver at Modern world Studios near Wales. He has produced man of the Manic street Preachers material and they have recorded many of their material there. The rest of the tracks were produced by myself and David Nevard (Rhythm Guitar – The Grenadiers)  I wish The Grenadiers & Kevin Sane all the best for the future   check out our other interviews and please like us on Facebook and follow us on Instagram @mods_of_you_generationInterview conducted by Johnny Bradley – Mods Of Your GenerationInterview (c) Mods Of Your Generation 2019