Agent Bulldogg Started rehearsing in Thomas bedroom (much to his parents’ enjoyment) back in March 1986 after about half a year or so of talking about it, recruiting members and getting hold of equipment through various ways. After another year of learning, and a move to the legendary – in Täby anyway – Vita Huset (The White House) for rehearsals we played our first gig in the early summer of 1987. We played a couple of more gigs that year and also recorded a demo before original bass player Micke were replaced by Jens in early 1988. That line-up continued to play any gigs we could get, and also managed to record some songs who found their way onto a compilation album as well as recording our debut album – “Livsstil” (A Way of Life) – in 1990.

It wasn’t actually released until 1992 (on our own label) and by then Jens had left the band only to be replaced by Jarl. With this line up we played in Germany, Finland and Austria and also recorded our second album “Ett Tusen Glas” (One Thousand Glasses) – again on our own label – together with the new member Johan on saxophone and keyboards. When we released it 1995, Jarl had left and was replaced by Olof. We continued doing gigs, in Norway for instance, before original guitarist Andreas – more known as Bogh – decided that enough was enough and left. A friend of a friend’s friend then joined briefly, but that didn’t quite work out so Daniel stepped in for a while. However Olof moved to Switzerland and original drummer Magnus became both disillusioned and pre-occupied with his new job so he decided to leave as well. Olof stepped in to do some studio work and together with some help from a couple of other friends two tracks for the compilation album Brewed In Sweden were recorded and released 2002.

Thomas and Johan continued to write a couple of songs but with no other members available it started to fizzle out. However the band never officially broke up, so when a friend asked if we could play a couple of songs for his 40th birthday, Thomas and ex-bass player Jens teamed up with 3 members of Antipati to do so.

We got a few more offers of doing gigs so it just felt natural to continue with that line-up, although Reidar decide to leave due to other commitments a couple of years later.

Since then the band has played in Belgium, England, France, Germany, Poland and Spain as well as some festivals and other various gigs in Sweden, and also released a split 7″ with The Templars, contributed to a four band split (with Gimp Fist, Sandals and Booze & Glory) and released a new EP “Vi Är Tillbaks” (We Are Back…) on tour own label – as always. The current line-up is: Thomas (vocals), Johan (guitar), Robert (guitar), Jens (bass) and Thobbe (drums)

Agent Bulldogg are special guest at The Great Skinhead Reunion, and we will be all be helping them to celebrate Swedens national day, in Brighton, England June 6th -8th 2014 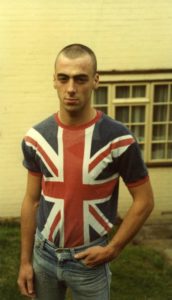 Symond. Skinhead Trafalgar Square 1980. Gavin Watson “What makes Gavin’s photos so special is that when you look at them, there’s clearly trust from the subject towards the photographer so it feels like you’re in the photo rather than just observing’.” —

Stomper 98 are confirmed for the great skinhead reunion in Brighton England june 3-4-5th 2016. Brighton is seen as a birthplace of the skinhead subculture, with mods and rockers fighting on the beaches in 1964, by 1967 the skinhead had

How the Music Industry can stop the extinction of British Venues

A few years ago, i flew over to USA to see friends in California. But also, to go see one of my friends bands, called Cock Sparrer. As we drove down from LA to The Great American Music hall in