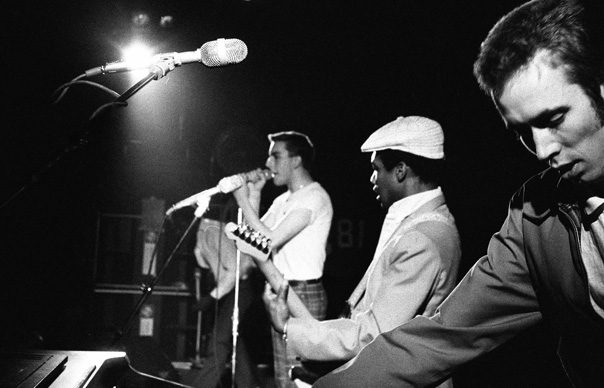 The Specials, Madness and The Selecter: The 1979 2-Tone tour remembered

Reading this piece online got me thinking about 2tone. what a year that was, i was 14 years old, 3rd year at Hatters Lane secondary modern school High Wycombe. Youth cultures were all the rage as Punk Rock had caused a revolution in 1976 when the Sex Pistols launched an all out assault on the establishment. The British youth were rising, and no longer would be tools for the wealthy.

Micklefield estate covered about a square mile just the other side of the Greenbelt which surrounds London, a border designed to stop the spread of the Metropolis, but in the 1950’s many families were moved out of bomb damaged London to new estates, with gardens and fresh air, my family came out of North London Tottenham area. The fire of a city kid was in my veins, handed down through blood. Punk and the Aggro answered that energy. Also on my estate was a large number of West Indians,who started arriving from around 1964 to work as nurses and bus drivers, mainly from the Caribbean Island of St Vincent, who bought with them Rice and Peas, gambling, Cannabis, Calypso and Reggae music, setting up sound systems in council flats, booming the bass across the yard like a earthquake murmur.

Most families on the estate were a sort of immigrant, like a mini New York, Polish who had stayed after world war two, cut off by Communism, Irish escaping the troubles in Northern Ireland, or just looking for a steady job. Londoners bombed out and finding peace in the suburbs. Many old WW2 soldiers tending perfect gardens, Italians, Indians all in the mix.

But at the same time a real lot of political turbulence, high unemployment, especially for the youth, we saw no future, the National Front were busy recruiting the disenfranchised white working class, blaming immigration for the situation, the Socialist workers party condemning the views of the white working class, blaming them for the situation. Racial tension was at a knife edge. Music was the only thing that really drew people together, The Irish knew this with their rebel songs, The IRA were murdering people, bombing Belfast and mainland Britain. But something happened one Thursday night, which was for us our own revolution…. The Specials Gangsters hit the screen. 2tone  changed my life forever.

Like a religion we all would sit indoors for that one hour a week, no kids were out on the street, Top of the Pops would showcase the top bands climbing the charts that week. Often airing acts you had never heard of, The large labels latest signings, as kids we looked for our gernre, the music which appealed to our youth tribe, for me that was Skinhead or Punk bands. whether it was planned by Gerry Dammers, or those bands from London and Coventry. The Specials, Madness, Selector, Bodysnatchers, The Beat, Badmanners, or not, they certainly nailed the energy across our estate, kids that looked and dressed like us. Black and white wearing hand me down clothing with an edge and style, shaved heads and Dr Martens, Reggae and Punk in the same song… My emotions exploded in a musical excitement frenzy. Fuck David Bowie……We were on Top Of The Pops!!!!!

Amazing to think after almost 40 years on Live in brighton 7th September, Neville Staple with his band performing many of those original songs mixed with some throughout his career ever since. Supported by a bran new band to take the music into today generation Dakka Skanks

I was reminiscing with an old friend over the weekend about The Specials, his favourite band. Our chat brought us to the great 1979 2-Tone Tour that featured The Specials, supported by Madness and The Selecter, a snapshot of which now duly follows.

I was reminiscing with an old friend over the weekend about The Specials, his favourite band. Our chat brought us to the great 1979 2-Tone Tour that featured The Specials, supported by Madness and The Selecter, a snapshot of which now duly follows.

There are 43 alarm calls booked for this morning and – woe, pitiful woe! – they’ve started going off already, one of them heading this way.

The shrill exclamatory shrieks of the alarms is usually followed by weary grumbling moans and the thud of people rolling out of beds in rooms all along this wing of Swindon’s Crest Motel, where the cast of the 2-Tone Tour are beginning now to assemble in the lobby, pale-faced and hungover. The motel staff in startling contrast are, meanwhile, crisp and morning-bright, with gleaming toothpaste smiles and the brisk efficient manner of people with things to do.

Specials’ singer Terry Hall is here to see off his girlfriend, who’s going home to Coventry. And here comes The Specials’ unlikely mastermind, Jerry Dammers, lumbering into view, an awkward shambling figure in a shabby raincoat. He manages a smile, briefly. Woody, the young drummer with Madness, who looks about, I don’t know, 12 or something, lights his first fag of the day and immediately starts coughing like a Kentucky miner, stricken with Black Lung or something similarly serious.

“My body’s had enough of me,” he splutters, doubling up in a fit of coughing and hacking away so violently I wouldn’t be surprised to see his eyebrows fly across the room, followed possibly by his teeth. He finds a chair and collapses into it, his face drained of colour.

We’re only three days into the tour and some of the people in the lobby around me, which has taken on the look of a field hospital in a 19th century war, look like they won’t see the end of it.

Of course, it was all very different just a few short days ago when on a gloriously sunny autumn afternoon I’d arrived at The Roundhouse, up there in Chalk Farm, where The Specials, Madness and The Selecter had spent the previous week rehearsing for the 40 date tour ahead of them. When I get to there, The Roundhouse is as they say buzzing, the place noisy with chat and laughter. The coach that’s been hired to take us all to Brighton for the tour’s opening night is already an hour late, which means before we’ve even started we’re behind schedule. No one seems to care.

The three bands are strung out across the Roundhouse bar. The Selecter and Specials mingle, wander and joke. Madness are quaffing light and bitters, being noisy. They look like a gang of spotty kids waiting to be taken on a day trip to the seaside, yelping and impatient.

A friend of mine named Kellogs who works for Stiff as a tour manger is standing at the bar, watching them. When Stiff signed Madness, they were put in his paternal care. He’s just finished a fortnight on the road with the rascals, and they’ve nearly brought him to his knees.

“They make me feel so old,” he says wearily. “They just don’t stop. Up till four every morning, boozing. Look at them. . .”

We look at them. Down the hatch go another seven pints.

“They’re fucking loving it,” says Kellogs. “They’re on top of the fucking world. A hit single, on the telly, on the road away from mum, drinking, smoking – all yobbos together. They’re having the time of their lives.”

“Annuver 300 pints of light and bitter,” cry Madness in unison as the coach finally pulls up outside The Roundhouse.

There are 40 of us on the bus and Madness inevitably are making most of the noise – shouting, swearing, clambering over the backs of seats, drinking, making ridiculous faces at the crowds on Oxford Street. Woody is especially boisterous, swigging from a half bottle of Scotch, one hefty slug after another, red-faced and increasingly wild-eyed.

Steve English, who’s providing one-man security for the tour, is sitting across the aisle from him. Steve, who’s worked as a bodyguard for, among others, Marvin Gaye, The Sex Pistols, The Clash and boxer John Conteh and is built like a Sherman tank, looks at Woody grappling with the deleterious effects of the whiskey and laughs, the sound he makes like a drain being sucked clear by complicated mechanical equipment.

“Silly little fucker,” he says of Woody. “If he carries on like that for the next six weeks, we’ll have to carry him off this fucking tour in fucking casket.”

The coach is outside Brighton Top rank now, where dozens of skinheads are waiting for Madness, led by Prince Nutty, whose mug beams also from the centre of the inner sleeve of One Step Beyond, Madness’ debut album. Prince Nutty is surrounded by a gang of fearsome-looking cronies.

“Remember me?” one of them asks Suggs. “I danced on stage wiv yer at the Rock Garden. Remember?”

“Yeah, ‘course I remember you,” says Suggs, who clearly doesn’t, pushing his way into the Top Rank, where we find a place to talk and are joined by a rather wobbly Woody. Kellogs had told me earlier that when Madness played Brighton Polytechnic recently on a brief warm-op tour for the current trek, a mob of British Movement supporters had turned up at the gig, threatening trouble.

“They didn’t do nuthin’, though,” Woody says. “They just stood around in the bar talking very loudly about Adolf Hitler.”

In Oldham, Kellogs had also said, a security check on the audience as they arrived at the gig led to the confiscation of a number of weapons – knives, even a home-made mace among them. There’d been a riot in Huddersfield, the group’s van trashed and a film crew terrorised. Suggs is sensitive on the subject of the band’s skinhead fans, but abhors the BM and the idea that Madness are a focal point for their politics.

“There’s no way we’re political,” he argues. “We’re certainly not fucking fascists. If we were fascists, what would we be doing playing ska and bluebeat? If we’d wanted to talk about politics we’d have formed a debating society, not a fucking band.”

The Brighton show is sensational. By the time The Specials play “A Message To You, Rudi”, most of the audience appear to be on stage with them, and those that aren’t are dragging the ones who are back into the crowd so they can take their brief place in the spotlight.

The group fight their way off stage through this demented rabble but find the safe haven of their dressing room picketed by a group of angry feminists who’ve been incensed by some off-colour remarks by Terry Hall and the description of the Melody Maker journalist Vivien Goldman, who’d unenthusiastically reviewed their debut album, as “a stupid cow”.

They now berate the unapologetic Hall at rowdy length. Their ring-leader notices Dammers, standing behind Terry, a bemused witness to the women’s wrath.

“And what have you got to say for yourself?” she loudly demands.

Jerry looks at her, grins gummily.

“Would you like to come to a party with me?” he asks her, ducking the blow he knows is coming.