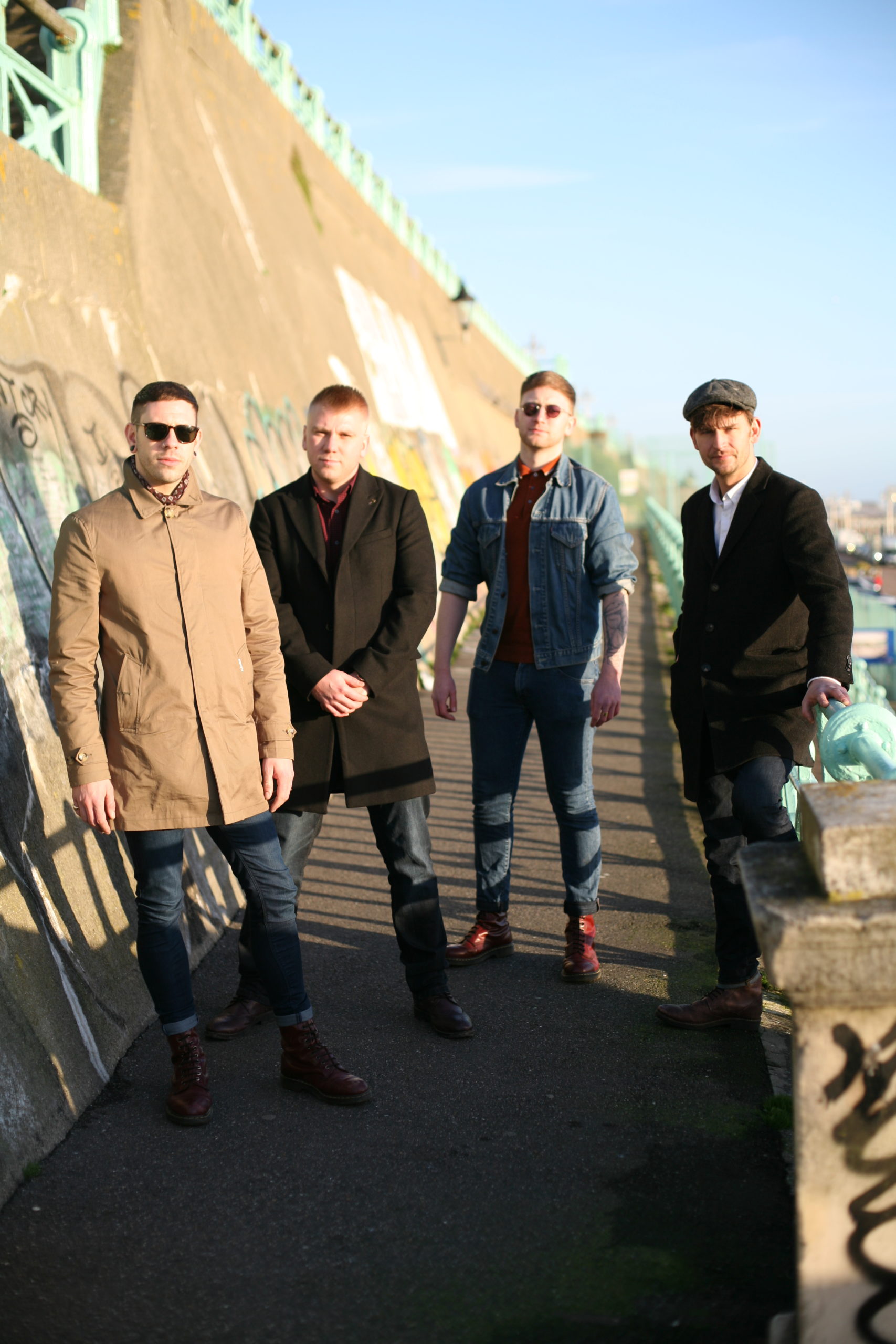 Back in 1979 I was a 15-year-old and it was an exciting time to be a teenager. There was an explosion of new youth subcultures, each having its own music and style of clothes.

There were Mods, smartly dressed and into ‘The Who’, Punks who had emerged in 1977, skinheads who had evolved from the ‘Hard mod’ of the 60’s and now had their own music ‘Oi’ and ska, which also crossed over into the Rude Boy & girls music of Two Tone/Ska and lastly the Casuals who followed the current trends.

Initially we all congregated at house parties, each proudly wearing our own subcultures ‘uniform’, all schoolfriends doing our own thing. I was proud to be a Mod but we all respected and listened to the variety of musical genres that were emerging from the main stream Top of The Pops, this in turn led up to find out more about our own genre and its history.

This harmony was not to last and towards the end of our school year, the subcultures became more exclusive and, in a way,, you had to ‘prove’ your alliance by wearing the right clothes and listening to the right tracks, meaning there was no longer the open appreciation of other music. Ludicrous really but we were after all kids. There were many fights and when we left school, we gathered at pubs and clubs specifically tailored to our musical tastes. As a side note it is interesting to note that the Dr Marten shoe was the only item of clothing to be accepted by nearly all subculture, it was and still is a symbol of ‘rebellious and anti-fashion’, later some mods became Scooter Boys & Girls who wore DM’s and U.S  flight jackets, the Skinhead had DM boots, DM shoes and Monkey books , as did the Punks who were becoming much more scarce by the early 80’s and in their place the New Romantics were not adverse to a patented pair.

Now if we come right up to date, as a 55-year-old ‘Mod’, it is strange how the mod dress sense has never left me, you will not see me in anything other than narrow trousers, lapels and ties whatever the fashion dictates. Every now and then I still congregate at pubs and clubs and listen to old and new bands. 40 years on you can still see many of the bands of yesteryear but more surprising are the new bands that have the essence of those heady days of 1979. Bands like Missing Andy who are a phenomenally talent bunch of lads, with clever sophisticated and fun lyrics. Their catch tunes and energy are infectious and they really deserve more attention than they have received to date; this is a band waiting to be discovered. They recently wrote a great piece for my book ‘Remembering The Chords’  (Sept 2020) about another talented Mod/Punk band from 1980 who never reach the heights they deserved. Elliot the drummer of Missing Andy notes ‘Being in a band is tough and not as glamorous as it may seem from the outside.  Firstly, It takes hours of hard work to get good, performing for free to home your craft.  Once you have achieved this, it’s then time to poke you head above the trees and stand out! Again, a very difficult task to grab the attention of the music industry.  After being contacted by ‘Ray’ who introduced me to ‘The Chords’ it was very apparent from the outset that these guys had accomplished all of the above!  Watching videos of their live performances reminded me of all hard work that went into ‘Missing Andy’ to get some attention.’

Brain Gosling arranges live events at our local pub, The Essex Arms in Brentwood, he does it purely as a labour of love of the music, mainly of the mod genre. But recently his audience have welcomed two new acts from different ends of the musically spectrum but their commonality is passion, talent and style. I hesitate to use the word ‘Cool’ but that’s what they both are, they exude it. First you have Georgia and The Vintage Youth, Georgia is a twenty something who scats in a jazz like/ Amy Winehouse way, she adapts and transforms any song from it’s popular form and just makes it ‘cool’, ( I apologise for the use of such old fashion terms (and it is better that I don’t try to use the modern day slang terms, no one wants to hear a middle age man trying to speak the lingo.)

Once you have checked out ‘Georgina and The Vintage Youth’ on the internet, the next band that exudes ‘coolness’ (I know it’s not a word that works but you get what I mean) The Subsetters previously known as Levi. Not only are they similar to Missing Andy and Georgina in that they all write their own fantastic tunes but The Subsetters truly resonant with me and take me back to those house party days.

From the moment they sauntered onto the stage they looked the part; four young lads dressed in skinny jeans, tight polo tee-shirts with micro thin braces and 18-hole DM boots. The clothing of the ultra-smart skinhead but with crew cut hairstyles, like their contemporary 60’s hard mod counterparts. They were humble and had a quiet confidence and the audience of mainly middle-aged men brought up on The Clash, The Jam, The Chords were unsure of the sound these lads would produce.

Wow ! Did they blow away our cobwebs? From the moment the first guitar strings were ‘attacked’ by the ultra-fast fingers of the guitarist and this machine gun firing of the guitar hit our ears, we were transfixed. Bam, bam, BAM came the ferocious drumming an artillery bombardment. Barely could we recover from the onslaught when Leeroy the lead vocalist started to moon stomp and skank along to the beat, a mesmerising display because it didn’t look staged or constructed, it flowed and they hit every beat; they were a physical extension to the sound.

The bands enjoyment and tightness was evident from this interplay between them and the ‘old’ audience were moving with them, their girlfriends looked on in amazement, perhaps they thought we would be a tough crowd. For me it was nostalgic, I was back at the 80’s house parties listening to  the Ska, Oi, Two Tone and Mod/ Punk, the Subsetters the catchy beat, the attitude and the ‘coolness’ in my mind I was back there as cool as them (ok I did say it was in my mind) The music  resonated with me and it obviously resonated with the whole pub because just then Leeroy kicked it up a gear and then when into overdrive. “Run..Kitty..Kitty Run..Run” he warned and while he skanked with  Conan Elliott on Bass who handled the bass guitar like an AK47 , (aptly one of their tracks is called  ‘Trigger’)  Leeroy  introduces the band by announcing the each band member by name then on cue, Mikey Brewer on lead guitar leaped onto a huge speaker and was aiming his at the audience, then above and behind his head; Leeroy then calls Rob Pegg on drums and a thunderstorm erupts, and the audience explode into skanking pogoing and Northern soul dancing – and just like the house party days it no longer mattered if it wasn’t the right dance because in honestly the Subsetters are so unique that their sound has to be re-defined, they call themselves the founders of Skindie

Back to the gig …a cyclone of noise that lifts the audience, swirls them around at at the end of Subsetters finale it unceremoniously drops them from a great height. The audience is exhausted yet elated and the Subsetters haven’t even broken out in a sweat, they humbly thank us and after an encore they prepared to depart. They are swamped by grown men clambering for their autographs and I heard one of the band’s girlfriends exclaim, ‘I don’t believe it, they want their autographs’. I smiled.

Every band has a main man a front man ( I am using the term loosely but it is used meant as a multi gender reference) and although  would Leeroy Brooks (Lead Vocals & Guitar),  be the default choice as the super cool, songwriter and lead singer but how can you separate that level of talent, they are all essential like the a fine tuned machine making the super cool Skindie sound.