Punk is coming back to save the planet

Chris Packham: “Punk is coming back to save the planet”

The naturalist sees punk pioneers getting excited again – and it’s down to Extinction Rebellion and youth climate strikers. He recalls his youth pogoing to God Save the Queen and draws parallels to today in Forever Punk

It’s Emergency by 999, perhaps the most underrated punk band, and I joyously recall vocalist Nick Cash reeling around the stage spitting out this song. So, so good! I’ve always liked the ‘never give in until they crack’ sentiment, and it’s particularly relevant today – because today is all about the biggest emergency ever.

When I reach Extinction Rebellion’s pink boat, moored on Oxford Street [in April], there’s a festival atmosphere and thousands of people are clearly delighted by the DJ’s choice of London Calling by The Clash. The bass is thumping through the colourful crowd, many of whom are singing along. I’m tempted, but I’m no Joe Strummer, so I keep my voice to myself. Well, my singing voice anyway.

When I address the fabulous party and salute their energies and endeavours to put the climate and environment emergency on the map and in everyone’s mind, I finish by asking them to continue to “shout above the noise”, to embrace the musical mantra that has informed, fuelled, directed and given integrity to my life for the last 40 years.

As a generation of Punk it has always been a major part of Punk attitude to campaign on ethics as diverse as fox hunting, Vegan, Nuclear power, Capitalism, Unions, Class System and now Global Warming.. ‘Subcultz’

Working on a @BBCFOUR documentary on the ideology of punk rock and had a great chat with Jordan (Pamela Rooke) . She has a book out ‘Defying Gravity’ by @OmnibusPress available here https://www.amazon.co.uk/Defying-Gravity-Jordans-Cathi-Jordan/dp/1785588362/ref=mp_s_a_1_fkmrnull_1?crid=3VJJTGZKML12O&keywords=defying+gravity+jordan&qid=1556627530&s=gateway&sprefix=defy&sr=8-1-fkmrnull … 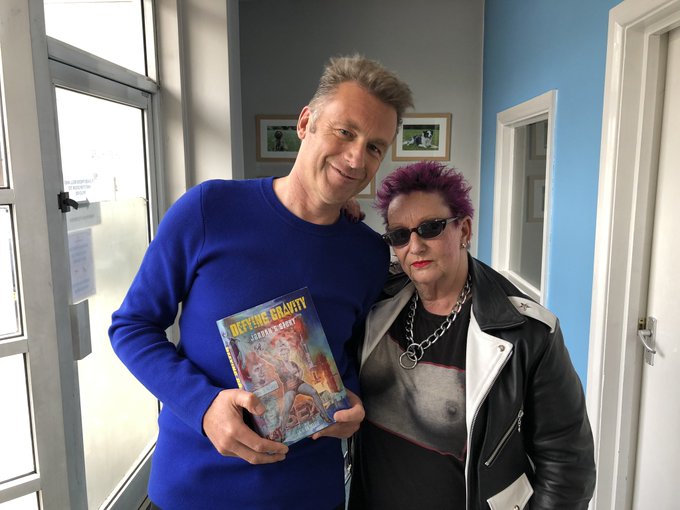 Fast forward a few weeks and I’m tiptoeing on tenterhooks into the basement of a North London pub to meet the maker of that essential and integral part of me, Pauline Murray – the vocalist from Penetration who penned that awesome anthem to independence, defiance, self-determination and rebellion.

They say you should never meet your heroes. They are wrong. She is wonderful and nurtures me through my starstruck interview and ends by handing me a handwritten copy of the lyrics. It’s framed now. It hangs prominently in my home and would be grabbed if fleeing from a fire. It will be in the casket with me for the terminal fire. It defines me and what I’ve done and what I do.

You see, for me the attitude and ethos of punk still pumps through my veins. Not just the music, the politics, the fashion, the art, but the method and the ferocious desire to change things – to never take ‘no’ for an answer, to make this a better place, to rail against injustice and always, always challenge authority. And maybe tear it down…

But am I just a sad old geezer trapped in the past, nurturing the nostalgic ideals of a youth, no longer of any contemporary relevance? Worse, am I, Chris Packham CBE, a sell-out, a hypocrite? Have I become the bastard I would have hated when I was pogoing to God Save the Queen?

Is it just me or are there a generation of other spiky old gits out there still angry, still fighting, still fired up by that social maelstrom that ravaged the UK in the mid-1970s? Well, that was my summer’s quest for BBC Four – to find them, quiz them, get the measure of them and then to see if their philosophies have been reborn and empower today’s activists, protesters and game-changers.

Spoiler alert. When I asked my stellar cast of punk’s original playmakers whether their ideology was alive and well, to a man and woman they cited “Extinction Rebellion” and the “youth climate strikers”. They smiled, got excited, shifted in their seats, punched the air – their eyes sparkled.

The consensus was that punk had finally woken from hibernation and was re-emerging to excite a new wave of very angry young people. They might be short of studs and safety pins, but they are not mincing their words and they are not afraid of the establishment.

They are breaking down doors, put ethics before the law, and, critically, these “stupid idiots” are not going to “shut up and go back to school” (that’s what Jeremy Clarkson said about Greta Thunberg). No these “truants” and “uncooperative crusties”(the last insult courtesy of our PM) will suck up such antipathy and use it like kryptonite to detonate essential creative and positive change. They might not know or even like it, but they are punks. I’ll leave Pauline with the last enduring and pertinent words…

‘Silence is no virtue in a crowded world / Where no-one

hears Feast your eyes upon the fools / Who follow the

them drag you in / Shout above the noise.’